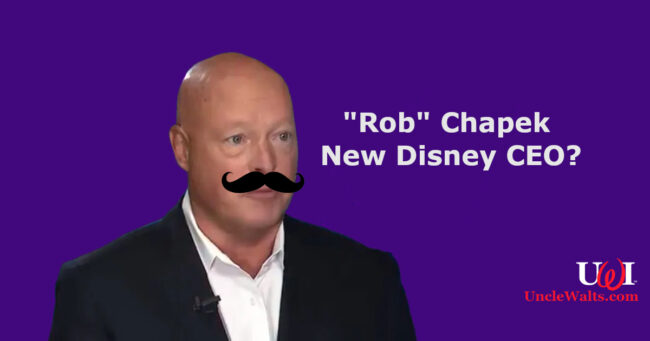 BR’ER BANK, CA – After Robert “Bob” Iger “reluctantly” seized the reins of the Disney Company last month from Bob “Bob” Chapek, fans and shareholders alike wondered if Iger’s return was only temporary or if he would be CEO-for-life, as previously reported by Uncle Walt’s Insider.

Some more permanent CEO replacements for Iger have already been rumored, such as Ole Miss coach Lane Kiffen and Elon Musk. We at Uncle Walt’s feel that our readers deserve a comprehensive list of possible Disney CEO replacements, so we worked tirelessly tracking down every rumor we could. And when that failed, as usual, we just made stuff up.

So who will be the next CEO of Disney? We’ve narrowed the list down to the most likely:

Pictured above. Apparently, Bob Chapek has an identical twin no one knew about?

Could do the job while looking for another election to lose.

Disney’s stock is already dropping, so why not an expert in losing money?

The former CNN anchor-potato has a lot of time on his hands lately.

Would take the focus off of Disney’s more controversial moves.

Maybe he and Stelter could co-CEO?

The obviously immortal former president needs something to do.

Pretty sure the nation would rally around him with love and adoration.

The VeggieTales creator once wanted to be the next Walt Disney, after all.

It would be interesting seeing what would happen to the “woke” Disney faction with a Baptist pastor in the lead.

Creator and current owner of The Babylon Bee. Apart from being an entertaining choice, this would cut down on competition for UWI.

He has some good ideas for the company. Or so we’re told. We can’t understand a thing he says.

He submitted his own name, now that Nancy is out of a job and will be home more.

Not sure if he’s interested. We just want him out of our office.

Another Chapek twin, er, triplet? This one has a goatee.

Our favorite Disney (the company) spokesperson would be a great choice! (And we’d have even more inside information.)

An actual Disney relative, she has always been loving and supportive of the company that bears her great-uncle’s name.

Composer of Godspell, Wicked, Pocahontas, Pippin, Guardians of the Galaxy 4: The Broadway Musical, as well as Working. Oh well, they can’t all be hits.

While we’re on the theme, the NYC toy store could offer some great merch tie-ins.

He did such a great job with Enron.

He did such a great job with KMart.

No word on whether DeSantis is actually interested. The name was submitted by a Florida resident named “Fonald Frump.”

Walt, Ub, & Marty contributed to this article, so we have plausible deniability about any particular item. (But it was mostly Ub.)

Which potential CEO is your favorite? Let us know in the comments below!

Cover photo: Possible Disney CEO “Rob” Chapek. Not sure we see a resemblance.

January 7, 2023 by Marty in Other
© 2020 Uncle Walt's Insider. All rights reserved. All images used with permission. Unless otherwise attributed, all images licensed under Creative Commons CC0 license. This site is protected by reCAPTCHA and the Google Privacy Policy and Terms of Service apply.