Behind the Magic: An exclusive interview with a Disney Spokesperson - Uncle Walt's Insider

Behind the Magic: An exclusive interview with a Disney Spokesperson 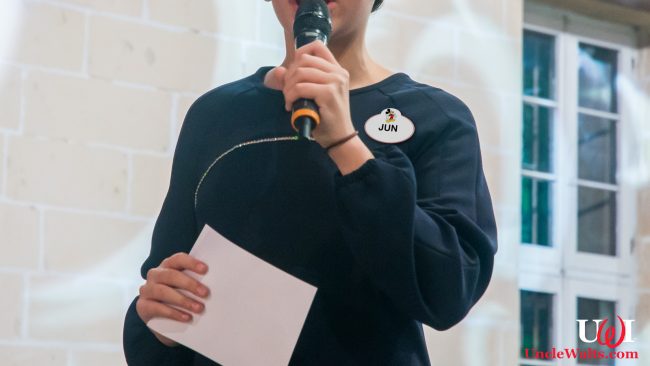 UNCLE WALT’S HEADQUARTERS — By now, our regular readers (all 3 of you) [Ed.: What? We’re up to 3? Woohoo!] probably feel like you already know Jun Disney (no relation), a Disney (the company) spokesperson frequently cited in our articles. But today, we’ve got a special treat for you — Jun has agreed to an exclusive interview with Uncle Walt’s Insider! So today, you get to meet and get to know Jun Disney (no relation), the person.

UWI: “Thank you for agreeing to this interview. It’s great to be able to talk more leisurely, rather than being on deadline with breaking news. Let’s go ahead and get started. I’m sure you get asked this all the time, but is Jun Disney really your name?”

JD(nr): “Thanks, I’m glad for the opportunity. Yes, it is. My father emigrated to the U.S. in 1960, shortly after Walt Disney opened Disneyland. He was so proud of his new country, and thought that there was nobody as American as Walt. His name was long and unpronounceable, so once he got his green card, he had his name legally changed to emulate his hero.”

UWI: “How did you get started in the theme park business?”

JD(nr): “I went to school at the University of Central Florida, and got a Bachelors of Theme Park and Attraction Management. I had some great professors, and it just kinda lead me to this job.

“Truthfully, I didn’t have a lot of options. I tried to apply at Six Flags, and they thought I was some sort of corporate spy. Can you picture it? Me? A Spy? Unfathomable! I’m thinking about going to law school though, it might be time for a change of pace. And then I’d be Jun Disney, J.D. I’m thinking about going to Florida A&M’s law school. They’re right here in Orlando. Although I also hear decent things about Baylor School of Law, in Texas. Have you been to Texas? Would I like living there?”

JD(nr): “Well, I can’t say it appeals to me too much, but Baylor is in Waco, so I’m pretty sure if I went there I’d get to hang out with Chip and Joanna Gaines.

“Anyway, I actually have a few other friends in the theme park industry. My former roommate, Junie Berry, (pause) yes, I know, Jun and Junie, we’ve heard it before. Anyways, Junie works out in California for Knott’s Berry Farm. She’s getting married next month, to Mr. Nick Versal. I’m not sure if she’s going to take his name. She’d be Junie Versal. She may have to change jobs and go work for Universal Studios or something.”

UWI: “Our longtime readers are familiar with how we always list you as ‘no relation’ when we give your last name. Can you share where that comes from?”

JD(nr): “It’s contractually obligated. When I started working as a spokesperson for the company they were concerned I’d be mistaken for one of those ‘Disneys.’ It’s not a big deal. We have spokespeople with the last names Mouse, Duck, McDuck, von Drake, and Poppins, and they all have to do the same thing.”

UWI: “We’ve only got time for one more question. What is the one thing that you’d most like to share with our readers?”

JD(nr): “I met (UCF Football Coach) Scott Frost once. He’s arrogant. And kinda weird. He thinks that because his team beat the team that beat the national champions, that makes UCF the champions. That’s not how it works. That’s not how any of this works.”

UWI: “Um, ok then. Thank you once again Jun. We’ll be talking to you soon.”

Are you related to anyone we care about? Let us know in the comments below!

July 7, 2018 by X in Other
© 2020 Uncle Walt's Insider. All rights reserved. All images used with permission. Unless otherwise attributed, all images licensed under Creative Commons CC0 license. This site is protected by reCAPTCHA and the Google Privacy Policy and Terms of Service apply.