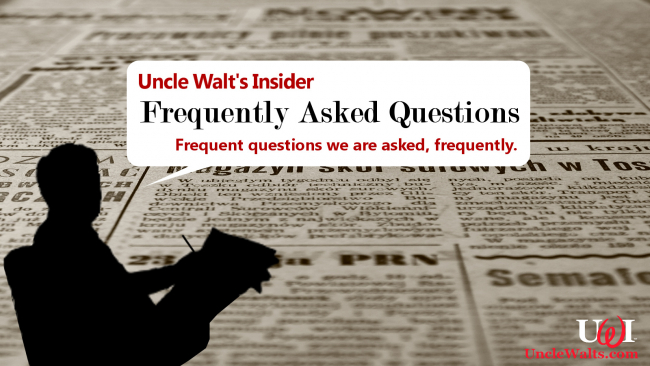 Questions? We get them. Frequently.

For those of you wanting to know a little more about Uncle Walt’s Insider, here are some of the frequent questions we are asked… repeatedly:

A. Our purpose is summed up by our founder, Uncle Walt: “There’s so much misinformation out there. We’re just doing what we can to help.”

You know, there are three or four hundred other websites that specialize in Disney and other theme park news. So we want our readers to find information here they won’t find anywhere else — even if we have to make it up.

Q. Is Uncle Walt the Walt? Like, Walt Disney?

A. He certainly seems to think so, but if true, that would raise a lot of awkward questions. So we just humor him. At most, it’s a Boys from Brazil (1978) situation, but with Disney instead of Hitler. We’re waiting on his “33 & Me” report to come back before we know for sure.

Q. Seriously, Walt? Marty? Harriet? X? Ub? Are any of you using your real names?

A. …Maybe? Okay, no. While we all love Disney, the company really likes to control its own image and doesn’t always look kindly on anything that might detract from it — like a satire site that occasionally takes loving jabs at it. So we like to keep a low profile, just in case any of us were to have, just by way of purely theoretical example, current or former ties to Mouse Inc.

Q. Wait — so are you saying some of you currently work for Disney?

A. Of course we are not saying that. Saying that is not something we are doing.

Q. Is your headquarters really in Svalbard?

A. Why? Have you been there looking for us and didn’t find us? Then that’s where we are. And don’t tell any I.R.S. agents anything different.

A. Yes. Because we’re smart and we said so.

A. All the time. In fact, we could devote a whole article just to the philosophical questions that we get — transcendence of mind, the nature of truth, the meaning of existence, the airspeed velocity of an unladen sparrow, why a loving God would allow the existence of cream cheese filled pretzels…. This just happens to be the one we get the most.

Q. Do you take outside submissions? Can I write for Uncle Walt’s?

A. Occasionally. Rarely. And always without pay. We’re honored, but Uncle Walt’s Insider is just a handful of friends with a shared love of Disney and similar sense of humor. We do this mostly to amuse ourselves. While we have had <shudder> outsiders submit articles, it’s not something we are looking for. Did we mention that we don’t pay?

Q. What’s the deal with all the churro love? I mean they’re okay, but it’s not like they’re the best thing in the world.

A. Sacrilege! Walt, have you figured out how to ban people yet?

Do you have a frequent question for Uncle Walt’s Insider? Let us know in the comments below!

May 11, 2019 by Marty in Other
© 2020 Uncle Walt's Insider. All rights reserved. All images used with permission. Unless otherwise attributed, all images licensed under Creative Commons CC0 license. This site is protected by reCAPTCHA and the Google Privacy Policy and Terms of Service apply.