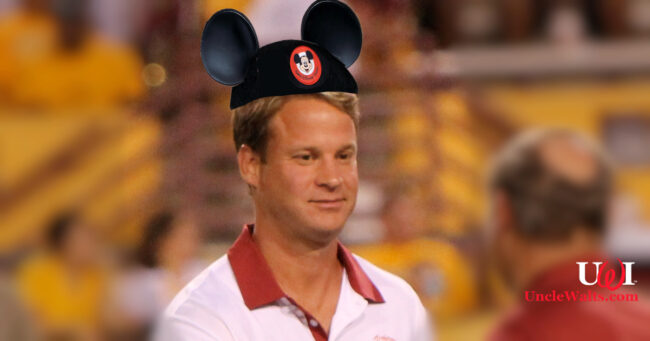 This gives us an idea for an article series…

Per a tweet from an unnamed ESPN Staffer [Ed.: Tell me it’s not Herbie again. Please do not say Kirk Herbstreit!] named Kirk [Ed.: Dang it.], Coach Kiffin is currently reaching out to Disney company representatives about the opportunity.

As usual, we’re ahead of these rumors. Typically because we start them.

The coach’s name first surfaced as a potential candidate on none other than this site. Although we thought there was little truth to the rumor at the time, apparently Kiffin is taking this seriously.

Kiffin reportedly told the source, “I’m very interested. I’ve been coaching football for many years, and I have stayed a long time at each school I’ve been at. It’s time to try something else.”

Well, kind of. According to our research [X thinks he saw this in a Yahoo Sports app article], Kiffin hasn’t stayed more than two years at any job he’s had in the past 15 years. And he was already job searching with 2 games left in the 2022-23 season.

Also, we’re fairly certain that if Kiffin gets the gig, he’ll have to change his name to “Bob.” We will keep you updated for further developments.

Who would you pick to be Disney CEO? Or to coach Ole Miss? Let us know in the comments below!

December 1, 2022 by X in Spotlight
© 2020 Uncle Walt's Insider. All rights reserved. All images used with permission. Unless otherwise attributed, all images licensed under Creative Commons CC0 license. This site is protected by reCAPTCHA and the Google Privacy Policy and Terms of Service apply.