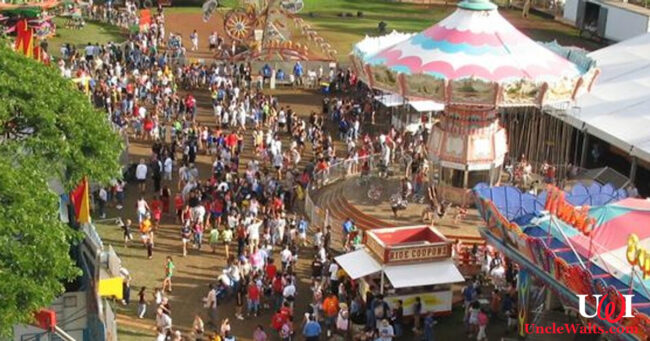 Sure, the picture looks the same, but you can tell it’s in Texas from all the concealed-carry bulges.

TWITTER — As predicted by absolutely nobody, Fake Theme Park has joined the growing list of entities that have announced they are moving to Texas.

In a now-deleted tweet, the popular theme park announced that they would be relocating from their current home in **FILLER TEXT** [Ed.: Be sure to find out where they’re located before we publish this!] to a swampy inlet not far from Kemah, TX. Previously, the only known attraction in the Kemah area is Buc-ee’s #28, located in League City.

Because the announcement tweet was deleted shortly after it was publishing, some speculators speculated that the news was fake. We attempted to contact the Fake Theme Park (the park)’s spokesperson Jun Fake (no relation), but did not receive a response in time for our editorial deadline. [Ed.: X, since when do you actually care about hitting your deadlines?]

We will continue to attempt to track down the information.

The deleted tweet also announced that popular park icon Princess Rainbow will now be using He/Him pronouns, and has requested to be known as “Prince Rainbow.” [Ed.: Just on odd-numbered days, right?]

Or is it just on even-numbered days? Let us know in the comments below!

Cover photo: Pretty much the same park, except for the added firepower. Photo lifted from Twitter: @fakethemepark.

January 26, 2021 by X in World
© 2020 Uncle Walt's Insider. All rights reserved. All images used with permission. Unless otherwise attributed, all images licensed under Creative Commons CC0 license. This site is protected by reCAPTCHA and the Google Privacy Policy and Terms of Service apply.