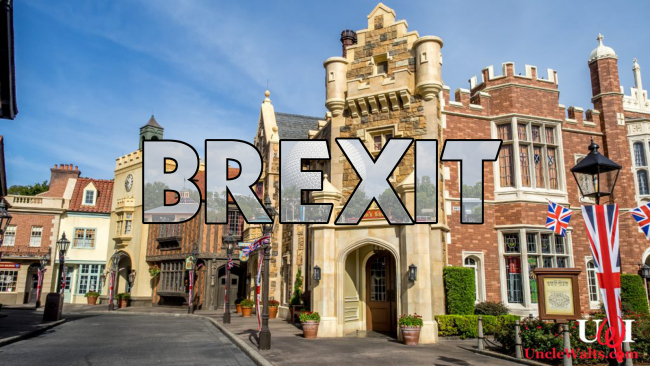 So many details have yet to be worked out.

WALT DISNEY WORLD, FL — The United Kingdom Pavilion is still hammering out details on its exit from Epcot’s World Showcase, as the March 29 deadline draws near. And now, the Pavilion has announced that it will seek a “short extension” on the deadline.

The U.K. Pavilion announced its withdrawal from World Showcase last May, as a consequence of the “Brexit” vote. The withdrawal, called “Epcexit” by no one, really [Ed.: It never caught on.], was supposed to be completed by the end of the month. However, the Pavilion and Disney have not been able to reach agreement on many terms.

“I hate to admit, but we are still far apart on many items,” says U.K’s Ambassador to Walt Disney World, Conrad Begbie. “Disney wants free passage of its park guests through the U.K. [Pavilion], without any border checks or extra admission, and they don’t seem willing to budge on that. But it’s our sovereign territory.”

There are also agreements yet to be reached on merchandise sales, character appearances (the U.K. claims Mary Poppins, Bert, and — oddly — penguins as “subjects of Her Majesty”), and also royalties for the use of British slang such as “flat, lorry, bangers, and Harry Potter.”

If no extension is agreed upon, the Pavilion will cease to be part of Epcot without an agreement in place. Won’t that create chaos in the World Showcase, we asked?

“Not our problem,” Begbie replied. “It’s not like we’re cutting off access to the rest of the park. If they don’t wish to respect our territory, the people can either go the long way around the other side, or jolly well take one of those Friendship Boats.”

Should the Antarctica Pavilion be upset about the penguin thing? Let us know in the comments below!

March 22, 2019 by Marty in Florida
© 2020 Uncle Walt's Insider. All rights reserved. All images used with permission. Unless otherwise attributed, all images licensed under Creative Commons CC0 license. This site is protected by reCAPTCHA and the Google Privacy Policy and Terms of Service apply.