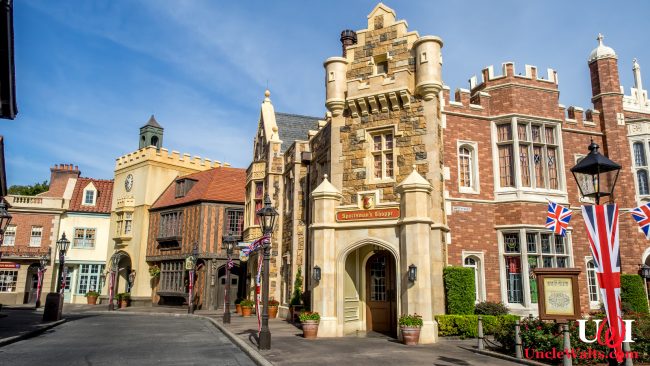 “Epcexit” joins “Brexit” in the lexicon.

LONDON & WALT DISNEY WORLD — As the Parliament of the United Kingdom continue to sort out the logistics of implementing 2016’s vote to leave the European Union, one consequence is clear: the United Kingdom pavilion at Epcot will no longer be a part of the World Showcase.

The U.K’s Ambassador to Walt Disney World, Conrad Begbie, served written notice to park management on Wednesday that the pavilion would “no longer be part of the community of nations known as World Showcase, effective March 29, 2019.” Signs have gone up at the pavilion indicating its days in Epcot’s World Showcase are numbered.

Uncle Walt’s Insider reached out to Ambassador Begbie for clarification on the impact of this move.

“It’s quite simple,” Begbie explained in his Patrick Stewart-esque accent. “Physically, the structures, shops, restaurants, entertainment, will all remain where they are now. Naturally, of course — when the exit from the E.U. is completed, you wouldn’t expect the British Isles to pack up and go somewhere else, now would you?”

So what will change? “Oh, there will be some details to be hammered out, but I expect that the U.K. pavilion will become its own legal entity, with British customs, laws, and currency. It will most likely require separate park admission, or at the least, transit visas for those guests wishing to travel through our sovereign territory from Canada to France, or vice versa.”

What other countries’ pavilions should go away? Let us know in the comments below!

Cover photo of the exiting U.K. pavilion via DepositPhotos.

May 24, 2018 by Marty in Florida, World
© 2020 Uncle Walt's Insider. All rights reserved. All images used with permission. Unless otherwise attributed, all images licensed under Creative Commons CC0 license. This site is protected by reCAPTCHA and the Google Privacy Policy and Terms of Service apply.