Last year’s announcement of a gondola transportation system coming to the Walt Disney World Resort has excited Disney fans worldwide, and launched many heated discussions on Uncle Walt’s Insider user forums. Now Uncle Walt’s can confirm that the new “Disney Skyliner” system is coming to the Disneyland Resort in California. The new Skyliner will not only operate within Disneyland, but will actually ferry guests between the California and Florida resort properties.

A new “highway in the sky”

Sharp-eyed (and obsessive) Disney fans first suspected a gondola system was on the way in February of last year, when the Walt Disney World Resort filed for construction permits for buildings whose footprints and positioning matched what such a system would require. The Walt Disney Company confirmed last summer that its new “Skyliner” system would transport guests between Epcot, Disney’s Hollywood Studios, and several resort hotels on the property.

The same unhealthily obsessive Disney fans have now uncovered shocking new additional information. Not content to monitor filings only in Florida’s Orange County and Osceola County, sharp-eyed fanatics have found filings for construction of gondola system structures across eight different states. The structures trace a line northward in Florida and then westward to California. 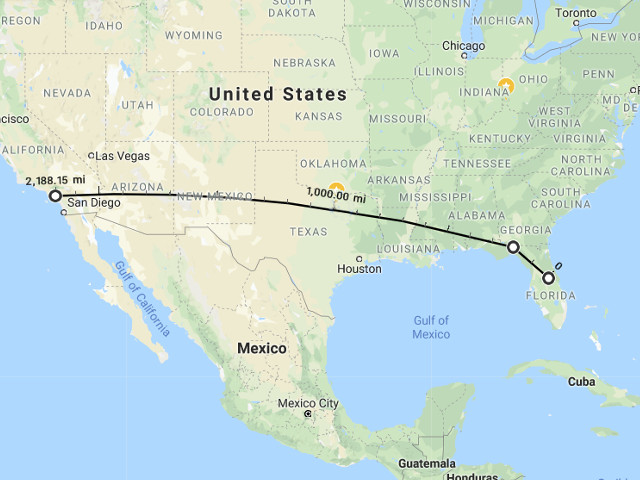 “We are just certain that our guests will enjoy the Skyliner ride so much,” Ms. Disney (no relation) says, “that we thought it would make sense to link our two U.S. properties and give them the option to travel between California and Florida without having to leave the Disney magic behind.”

Skyliner across the ocean?

Ms. Disney (no relation) confirms that this interstate link may be just the beginning. “If this is as popular as we think it will be, we’ll be looking into overseas gondola links as well. Eventually we may have all fourteen Disney parks worldwide connected on the Skyliner!”

The Skyliner will travel at a projected 25 miles per hour, so the almost 2200-mile trip between the resorts will take approximately 88 hours. Disney officials expect that guests won’t mind the extended ride, however, as it will include a one-hour layover at the Terrell, Texas, Buc-ee’s.

Are you as excited as we are to cross the U.S.A. by gondola? Let us know in the comments below!

March 26, 2018 by Marty in California, Florida
© 2020 Uncle Walt's Insider. All rights reserved. All images used with permission. Unless otherwise attributed, all images licensed under Creative Commons CC0 license. This site is protected by reCAPTCHA and the Google Privacy Policy and Terms of Service apply.