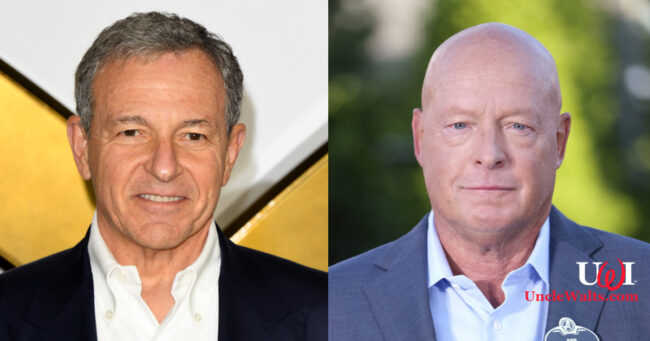 BURBANK, CA — As we predicted, Bob “Bob” Iger has returned as CEO of the Disney Company. In his first week, Iger announced he will reverse all of the poor decisions he blamed on Bob “Bob” Chapek, returning Disney to its full glory.

With our incredible inside contacts and sources [Ed.: Wait, Google counts as an inside source?], Uncle Walt’s Insider is able to give you a first look at the list of decision changes. They include:

Park-hop all you want now — but each hop will now also require its own park reservation, with the same credit card hold and $25 penalty if you fail to hop.

Paying extra for quicker access to rides? Iger feels Chapek did not charge enough, so prices will increase.

Chapek felt it wasn’t the right time to spend the money, but Iger disagreed and is pushing the project ahead, starting with the Magic Kingdom. All Splash Mountains will be rethemed to the Guardians of the Galaxy.

Chapek ordered all photographs of Walt Disney holding a cigarette — which is every known photograph of Walt Disney — to be modified to remove the cigarettes. Iger, however, has directed the pictures to be restored, and also that extra cigarettes be photoshopped into other historic Disney photographs. (In an unrelated item, tobacco company Phillip Morris has signed on as a sponsor of Disney Parks & Resorts.)

The statues are getting new features for Magicband+ users! Guests who make a smoking motion while wearing a Magicband+ Magicband will trigger cigarette smoke and a coughing sound, just like Walt Disney himself! This feature will stay after the 50th Anniversary Celebration concludes in 2070, just in time for the 100th Celebration to begin. (In an unrelated item, tobacco company Phillip Morris has signed on as a sponsor of Disney Parks & Resorts.)

Smoking in parks and hotel rooms

Iger has reversed the Chapek-era decision to ban smoking in the parks. Iger stated the new smoking policy disproportionality affected less affluent people, as well as minorities. The new policy reflects the same “Smoke ’em if you got ’em!” policy at Universal, and will allow smoking on attractions, in queues, restaurants, and all resort hotel rooms. Failure to smoke in your room may incur a $200 smoking fee, where Disney will have Housekeeping sit in your room and smoke for a solid 2 hours prior to the next guests arrival.

In an unrelated item, tobacco company Phillip Morris has signed on as a sponsor of Disney Parks & Resorts.

Citing the rise in obesity, Iger will reverse the Chapek era decision to remove sidewalks and replace them buses, restoring the Iger “No more fatties” sidewalk initiative.

No word yet on whether Chapek’s images are coming down at the former Holy Land Experience. Uncle Walt’s Insider will keep you posted about any other changes that are on their way.

Wow! Iger really is bringing in change! What is your favorite change Iger is making? Let us know in the comments below!

December 9, 2022 by Walt in California, Florida, Spotlight
© 2020 Uncle Walt's Insider. All rights reserved. All images used with permission. Unless otherwise attributed, all images licensed under Creative Commons CC0 license. This site is protected by reCAPTCHA and the Google Privacy Policy and Terms of Service apply.