Walt Disney World buses to be replaced with sidewalks 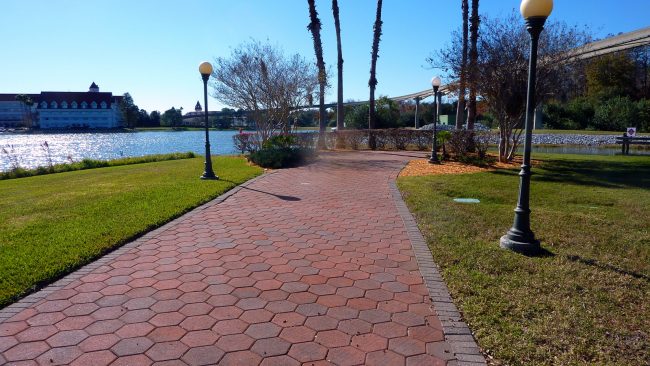 It’s the most wonderful time of the year — but it’s also the time when people tend to overindulge in our favorite holiday foods and drink! In order to combat this problem, Walt Disney World has announced that they will eliminate all Walt Disney World buses and replace them with sidewalks.

There is a growing trend among park visitors, and it is not hard to spot where it is growing: the waistline. At a recent TED talk, Walt Disney Imagineer Waylon Shepard shared that the average weight of visiting guests has increased by 3.14% in just the past year alone. As such, Imagineers have had to look at how they engineer attractions, transportation, and any type of seating. He also noted that the fuel consumption for each bus has also risen, causing management some headaches as they grapple with rising fuel costs and shrinking budgets.

Uncle Walt’s Insider caught up with Shepard while he was trapped in one of the trams from the gates to the main terminal at Orlando International Airport and couldn’t get away from us. In order to kill time, he agreed to an interview. Mr. Shepard explained, “We’ve tracked how far guests would travel while visiting the resort and cross-analyzed that with food purchases. We concluded that people were taking in more calories than they were burning, even after we offered healthier food choices with a higher profit margin, and increased the cost of unhealthy items, such as the churro.”

When pressed on the unhealthy statement, Mr. Shepard further explained, “A churro in moderation is okay. We found that some guests, such as one gentleman from Plano, TX, would walk away with 7-8 of them, and based on our records, his wife is gluten free, and he left his kids at home!”

Mr. Shepard continued our conversation with this bit of information, “After careful analysis with not only our own nutritionists, but also with our accountants, we concluded that the best way to keep profits up was to eliminate bus service, and install sidewalks. They require less maintenance and no cast members to operate them!”

Mr. Shepard concluded by pointing out that the number one guest complaint is about the bus service. “Now with Disney-approved sidewalks, guests no longer have to worry about missing the bus! The sidewalk is always available!”

Is this just a ploy to make more money?

While Disney is an entertainment company who focuses on family friendly fun, they are still a corporation. As such, they are expected to turn a profit each year, not just break even. Profits are also required to expand, such as building new parks. Is this announcement eliminating bus service just a way for Disney to increase profits?

We put a call into our trusty Disney spokesperson, Jun Disney (no relation). Ms. Disney (no relation) told UWI, “Profits had absolutely nothing to do with this decision. Guest health, safety, and satisfaction are our top priority. Guests will love strolling along our swamp-themed sidewalks, cheerfully sharing stories of their day at our amazing parks. If guests do not wish to walk, they can simply summon one of our cute Minnie Vans via the Lyft app, and for a nominal fee, get a ride to or from their resort hotels.”

Are you ready for sidewalks? Let us know in the comments below!

December 27, 2017 by Walt in Florida
© 2020 Uncle Walt's Insider. All rights reserved. All images used with permission. Unless otherwise attributed, all images licensed under Creative Commons CC0 license. This site is protected by reCAPTCHA and the Google Privacy Policy and Terms of Service apply.