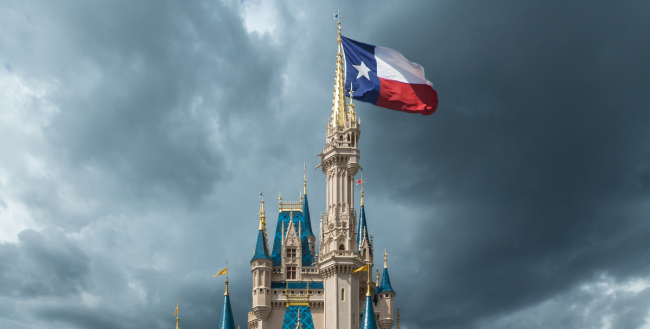 For decades, theme park fans have traded tales of a rumored third Disney property to be built in the central United States, with Texas being the most likely location.  While Disney parks in California and Florida consistently rank as the most attended theme parks in the world, enthusiasts living midway between the coasts do not have easy access to their favorite parks, so the rumors have continued despite repeated denials by the Walt Disney Company. Well, Uncle Walt’s Insider can now reveal that a “Disneyland Texas Resort” will soon be a reality.

Residents of the quiet town of Chickasha, Oklahoma (pronounced CHICK-uh-SHAY), have known for years that the area was being targeted by a major real estate investor. A total of 60,000 acres of strategically located land had been purchased by several small companies over the past four and a half years. Rumors swirled around town, but the biggest seemed to point to Apple building a new North American Headquarters and assembly facility. Uncle Walt’s Insider looked into this rumor, and found it to be false. Another rumor pointed at a new launch facility for Elon Musk’s Space-X corporation. This too was found to be just another rumor. We chased down rumor after rumor: World’s largest Stuckey’s, another Costco, or a brand new Chickasha International Speedway. All of these proved to be false.

On a hunch, we reached out to the Walt Disney Corporation and they sat us down with an exclusive interview with Disney spokesperson Jun Disney (no relation). We questioned Ms. Disney (no relation) on these land deals, and she confirmed the rumors. “Walt Disney Parks and Resorts are happy to announce we will soon break ground on the newest vacation destination, Disneyland Texas Resort!”

Ms. Disney (no relation) showed us a model of the Disneyland Texas Resort’s biggest highlight, the first of many theme parks, Disneyland Texas Park. The park has a unique centerpiece: instead of a castle at the hub of the park, it features a replica of the Alamo, but double the size of the original. Disney (the company, not the spokesperson) plans to bring in many of their popular rides as well, but with each with a Texas twist. All of the table and quick service restaurants will be operated by Whataburger, a classic Texas institution. And while you will still find classic Disney characters roaming the park, guests will want to grab a FastPass and get in line to meet real Texas heroes such as Stephen F. Austin, Davy Crockett, Melinda Gates, and Rob Van Winkle.

Ms. Disney (no relation) showed Uncle Walt’s Insider renderings of the hotels that will be included at the new property. “The design of this new area will include six different hotel resorts, all themed to the six different nations that have had sovereignty over Texas,” Ms. Disney (no relation) said. “Guests will be able to choose to stay in Spain, France, Mexico, the Republic of Texas, the Confederate States of America, or the United States of America. Each resort will feature the architecture, the foods, and even the people that make each of these nations unique.” Uncle Walt’s correspondent asked if this wasn’t almost identical to the original concept of Six Flags Over Texas. Ms. Disney (no relation) replied that the Six Flags property in Arlington, Texas, has switched to using generic flags, so the idea is “up for grabs.” We also asked why Disney acquired nearly double the land as Walt Disney World, and Ms. Disney (no relation) responsed with a smile, “Why, everything is bigger in Texas!”

One big question remains: Why build a Texas-themed resort in Oklahoma? While many details of the coming resort have yet to be revealed, Disney says that Oklahoma will let the company add a feature which would not be allowed in Texas, California or Florida. The resort will include another Disney (the company, not the spokesperson) first, “Uncle Scrooge’s Casino.” Ms. Disney (no relation) wouldn’t go into any other details, but she did ask us if we’ve ever “swam in money.”

As this story went to press, it was revealed that a portion of the 60,000 acre property was being set aside for “the world’s biggest Buc-ee’s.”

October 15, 2017 by Walt in World
© 2020 Uncle Walt's Insider. All rights reserved. All images used with permission. Unless otherwise attributed, all images licensed under Creative Commons CC0 license. This site is protected by reCAPTCHA and the Google Privacy Policy and Terms of Service apply.