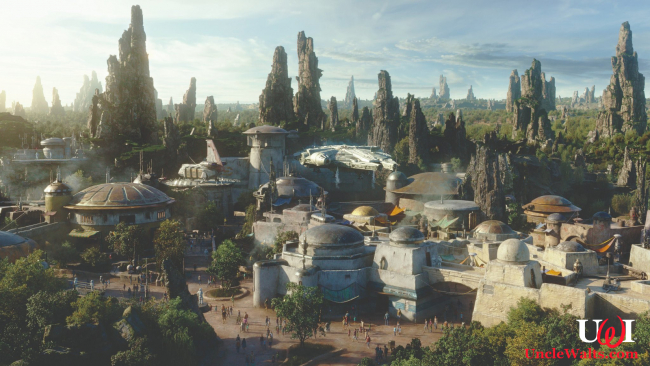 To reduce crowds, restrooms won’t be available until next year.

DISNEYLAND & WALT DISNEY WORLD — Star Wars fans worldwide are besides themselves with excitement, now that the opening dates for Star Wars: Galaxy’s Edge have been announced. But they may be missing an important fact — the new areas won’t have any restrooms.

The need to go is strong in this one

“We know it’s going to be packed whatever we do,” says Disney (the company) spokesperson Jun Disney (no relation). “But we’re desperate to keep crowds manageable. Sure, we’ve tried publicizing the awful animatronics that will be there. [Ed.: Here, here, here, here, here, here & here.] And we’ve tried auctioning off Fastpasses. But it still seems like the crowds will be huge.”

Disney (the company) seems to have hit on a solution, Disney (no relation) says.

“We’re just not finishing out the restrooms until late 2020 in either park. That way guests will either have to have abnormally large bladders, or will be forced [Ed.: Ha, “forced.”] to leave the entire area.”

This, of course, raises a new concern. Star Wars fans aren’t necessarily known for their high personal hygiene standards. Isn’t the company worried about guests “boldly going” right where they are? [Ed.: That’s a Star Trek reference, not Star Wars.] [Marty: I know. You try coming up with Star Wars-related toilet wordplay, if it’s so easy.]

“Sure,” Disney (no relation) replied. “Taking out guests tinkling in public is the prime reason why we’ve given our stormtroopers blasters with a working stun setting. Now we just need to work on their aim.”

Can you think of any Star Wars potty puns? Let us know in the comments below!

March 15, 2019 by Marty in California, Florida
© 2020 Uncle Walt's Insider. All rights reserved. All images used with permission. Unless otherwise attributed, all images licensed under Creative Commons CC0 license. This site is protected by reCAPTCHA and the Google Privacy Policy and Terms of Service apply.