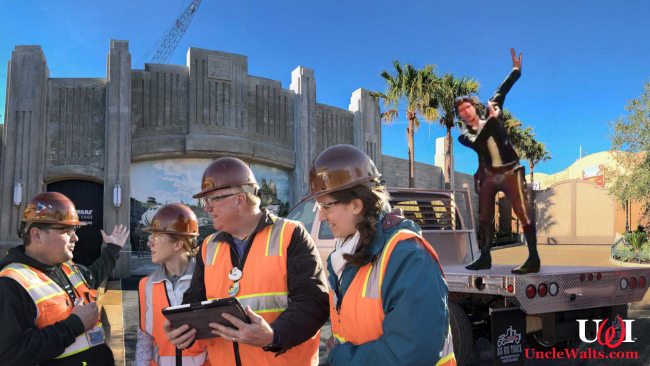 We’re starting to sense a pattern.

ANAHEIM, CA — In what is an apparent attempt to keep crowds manageable after the highly-anticipated opening of Star Wars: Galaxy’s Edge, another less-than-exciting audio-animatronic figure has been spotted arriving at the Disneyland Resort.

As Uncle Walt’s Insider reported, Disney already installed less popular figures from the Star Wars Universe: Jar Jar Binks and Bea Arthur’s Ackmena from the Star Wars Holiday Special. But even the arrival of beloved central character Princess Leia was marred. Somehow the Imagineers chose to create the old, frozen General Leia version of the character, not the younger one wearing a space bikini.

Once again a main character’s animatronic has arrived at the park, and once again fans are disappointed. This time, it’s Han Solo, the lovable rogue smuggler who appeared in every Star Wars film from the first/IVth one until he was killed by his son Ben/Kylo Ren in The Force Awakens. (Er, spoilers, I guess.)

So is there any length to which Disney will not go to keep the park from overcrowding? What’s next, “Minions”?

September 12, 2018 by Marty in California
© 2020 Uncle Walt's Insider. All rights reserved. All images used with permission. Unless otherwise attributed, all images licensed under Creative Commons CC0 license. This site is protected by reCAPTCHA and the Google Privacy Policy and Terms of Service apply.