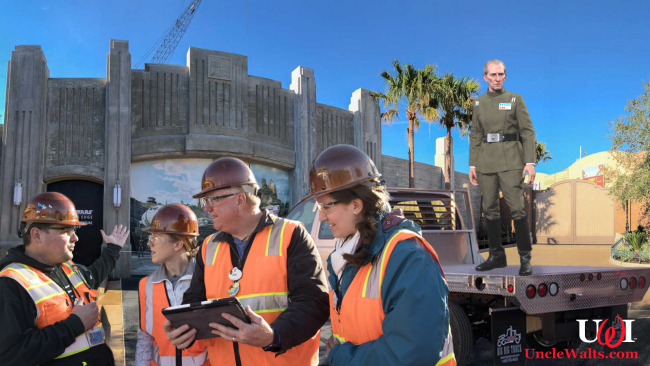 The “reanimated” character will require “dumbing down” the animatronic technology.

ANAHEIM, CA — With Star Wars: Galaxy’s Edge just months from opening, another less-than-exciting audio-animatronic figure has been spotted arriving at the Disneyland Resort.

This time, the new character arriving at the park is none other than Peter Cushing as Grand Moff Tarkin from the original Star Wars! (That’s “Episode IV” for those of you younger than 50.) We’re actually impressed — Tarkin is a genuine bad guy, and a cool one at that, who calmly orders the destruction of…

Sorry, we were wrong. According to a source in Disney Imagineering, it is not Peter Cushing’s Tarkin that is being installed. Instead, it is the creepy CGI version from Rogue One: A Star Wars Story.

Oddly, our Imagineering source seems proud of this fact. “Our audio-animatronic figures have become so realistic these days. We really had to work hard to make CGI Tarkin’s movements and expressions just a wee bit ‘off’.

“I think we really hit the perfect amount of wrongness. You’ll see the figure and think, ‘That really almost looks like a dead actor reanimated without his knowledge or permission’!”

November 3, 2018 by Marty in California
© 2020 Uncle Walt's Insider. All rights reserved. All images used with permission. Unless otherwise attributed, all images licensed under Creative Commons CC0 license. This site is protected by reCAPTCHA and the Google Privacy Policy and Terms of Service apply.