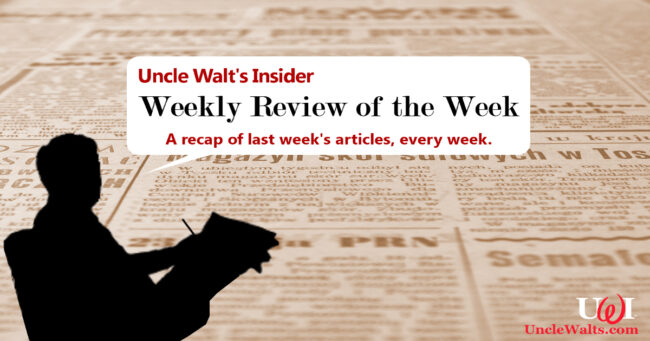 Here’s what you missed while doing something much less important!

Appearing this past week on Uncle Walt’s Insider:

(STEP) MOMS PANEL: DISNEY PARKS ARE TOO FAR AWAY. CAN I BUILD MY OWN? | Having built (or imagined) several new theme parks ourselves, the (Step)Moms can help!

SEVEN DWARFS QUARANTINED, ONLY ONE IS SYMPTOMATIC | Disney officials are not saying which of the dwarfs has been sneezing.

WINCHELL’S DONUT HOUSE, OTHERS ON CHOPPING BLOCK AT EPCOT | If you were looking forward to getting Timbits at Le Cellier, you’re out of luck.

(STEP) MOMS PANEL: DUE TO THE VIRUS, COULD TRUMP AND BIDEN DEBATE AS AUDIO-ANIMATRONICS? | The (Step)Moms think this is a brilliant idea. Or at least an entertaining one.

What articles would you like to see? Let us know in the comments below!

August 9, 2020 by Marty in Spotlight
© 2020 Uncle Walt's Insider. All rights reserved. All images used with permission. Unless otherwise attributed, all images licensed under Creative Commons CC0 license. This site is protected by reCAPTCHA and the Google Privacy Policy and Terms of Service apply.