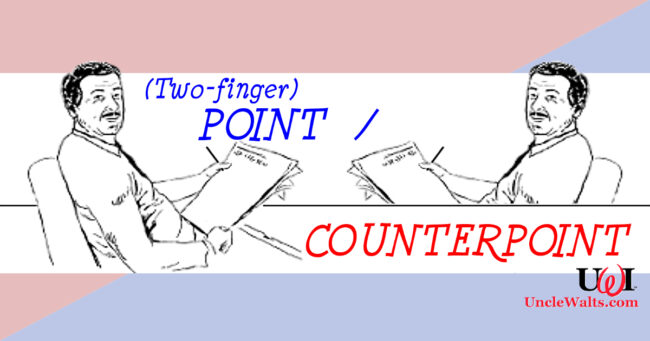 (Two-finger) Point/Counterpoint is a recurring feature where we normally debate with ourselves about current theme park news — but this time we have a special guest taking the Counterpoint: Disney CEO Bob “Bob” Chapek!

SUBMITTED: Disney is going down the wrong path by charging guests for “extras” that used to be free. They should stop.

Walt Disney had a dream, a dream of a magical place were parents and children could play and laugh together. So he created Disneyland, and later EuroDisney. (I think the Florida place opened between them, maybe?) And while there was always a financial outlay for families to go to a Disney park, especially if they didn’t live in Paris, Walt never intended his parks to be a playground for the ultra-rich only.

Costs of a Disney trip have been going up for some time, but under the current regime of CEO Bob “Bob” Chapek, it seems like guests are being nickel-and-dimed every time they turn around. Things that used to be free or included in a Disney vacation now cost extra.

MagicBands? No longer free. Fastpasses? Gone, replaced with the “Lightning Lane” pay service. Luggage pickup and delivery from Orlando International Airport? Gone. Airline check-in and baggage handling at the resorts? Gone. Disney’s Magical Express? Gone at the end of the year. Free transportation inside the Walt Disney World resort? It’ll cost you lots of shiny dimes. Churros? Okay, they never were free, but we really like churros, so they should be.

And now it seems that you’ll have to pay to get out of Disney toilet stalls! And are any of these new charges leading to reductions in room rates or theme park admission? No, they are not. In fact, those prices continue to rise.

Come on, “Bob,” if that is your real name. Have a heart. Stop charging your guests for every single little thing, or at least give them a break on the rest of the vacation costs. It’s what Walt would have wanted!

November 21, 2021 by Marty in Spotlight
© 2020 Uncle Walt's Insider. All rights reserved. All images used with permission. Unless otherwise attributed, all images licensed under Creative Commons CC0 license. This site is protected by reCAPTCHA and the Google Privacy Policy and Terms of Service apply.