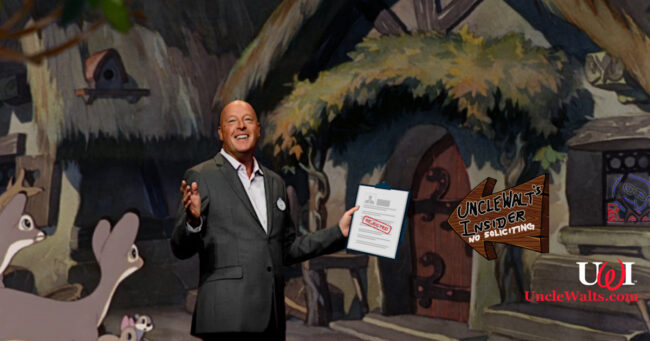 Would you hire this man?

“It was the most bizarre thing,” said Skrewi. “I was working in the front office, and Bob ‘Bob‘ Chapek walked in with an application to come to write for us. Which is especially weird, since we don’t have any applications.” [Ed.: And we usually keep our front door locked, just to avoid this specific situation.]

After receiving the form, Skrewi asked the Disney CEO to wait while he hand-delivered the application to Uncle Walt’s Insider CEO, “Uncle” Walt Yensid.

“Seeing the application was great for a chuckle,” says Yensid. “Ultimately, though, I threw it in the trash. In fact, I told Ub to let Chapek know that even we had standards. Sure, we keep Ub on staff, but we could never hire someone like Chapek.

“For one thing, we don’t produce this news site to turn a profit. [Ed.: Maybe not by choice.] We want to educate theme park fans, not squeeze our readers for every penny they have. If we brought Bob onto the team, we’d be charging the reader for every letter on the page before long. Hence, we prefer to put that squeeze on our sponsors, like Big Jim Thunder, Attorney at Law, or Scrooge McDuck’s Shiny Dimes.”

Once Skrewi had returned to the lobby, he sent the executive away, making sure to pass on the insulting statements about him.

Later, we asked Uncle Walt’s spokesperson Jun Yensid (no relation) for her thoughts. “While it would surely be interesting to have a Disney mucky-muck on staff, we can’t justify bringing in a reader-bleeder. Therefore, Walt made the right decision concerning ‘Bob’.” Yensid (no relation) notedly used air quotes as she said Bob “Bob” Chapek’s nickname.

A bit of a misunderstanding

Later, Walt called Screwi into his office. “Ub, bless your heart, you just don’t get when I’m being sarcastic,” said Yensid. “I certainly have to remember to tell you not to actually repeat stuff like that.”

We called Chapek for comment. He answered, but hung up and refused to comment when he realized we weren’t changing our mind and offering the job.

As I was both the writer and the anonymous whistleblower, this article was very uncomfortable to write.

EDITOR’S NOTE: The poor quality of this article, including quoting himself in his own article, is why we strongly discourage Ub from writing.

Should we just go ahead and fire Ub? Let us know in the comments below!

Cover photo: Artist’s conception of Chapek arriving at the Uncle Walt’s Insider Headquarters in Svalbard. Most of the photo and its various elements © Disney.

October 23, 2021 by Ub in Other
© 2020 Uncle Walt's Insider. All rights reserved. All images used with permission. Unless otherwise attributed, all images licensed under Creative Commons CC0 license. This site is protected by reCAPTCHA and the Google Privacy Policy and Terms of Service apply.