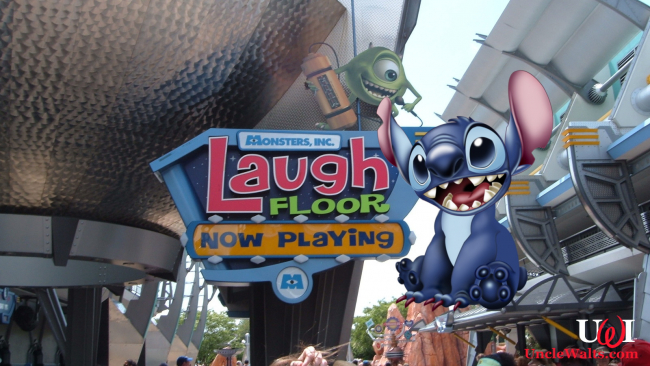 Why let a perfectly good animatronic go to waste?

WALT DISNEY WORLD, FL — Rumors continue to fly around major changes coming to the Walt Disney World Resort — from gifts shops in the new Skyliner gondola cars and attraction queues, to a Tron retheming of the steam trains, to changing sky colors on the overhead weather dome.

But now, shortly after Disney announced the addition of an adults-only late-night comedy show at the Monsters Inc. Laugh Floor, that attraction is getting another monstrous addition to its lineup: Stitch.

One good monster deserves another

While many people were not fans of the Stitch’s Great Escape attraction, almost everyone agrees that the Stitch animatronic was amazing. Now that Stitch’s Great Escape is almost certainly closed for good (rumored to be replaced by either a Wreck-It Ralph show or a dark ride based on the 1963 Disney classic The Three Lives Of Thomasina), it was feared that the Stitch animatronic would be dismantled, repurposed, or stored away, never to be seen again.

Based on the latest rumors from inside the Magic Kingdom, Uncle Walt’s Insider is happy to report that the Stitch animatronic will be joining the Monsters Inc. Laugh Floor — not as a perfomer, but in the audience as a heckler! It’s a perfect combination of Disney’s legendary frugality and synergy — get new use out of something they already have, while combining two properties in a new and exciting way!

We’re exciting to see how Stitch will be used. Will he say more alien cuss words — especially during the late-night shows? Is he going to escape and terrorize Buddy Boil? Will he try to eat “That Guy”? The possibilities are endless.

Are there other animatronics you’d want added to the Laugh Floor? Comment below!

Cover photo of Monsters Inc. Laugh Floor at the Magic Kingdom Park, plus Stitch, by Michael Gray [CC BY-SA 2.0] via Flickr, plus Stitch.

August 22, 2018 by Marty in Florida
© 2020 Uncle Walt's Insider. All rights reserved. All images used with permission. Unless otherwise attributed, all images licensed under Creative Commons CC0 license. This site is protected by reCAPTCHA and the Google Privacy Policy and Terms of Service apply.