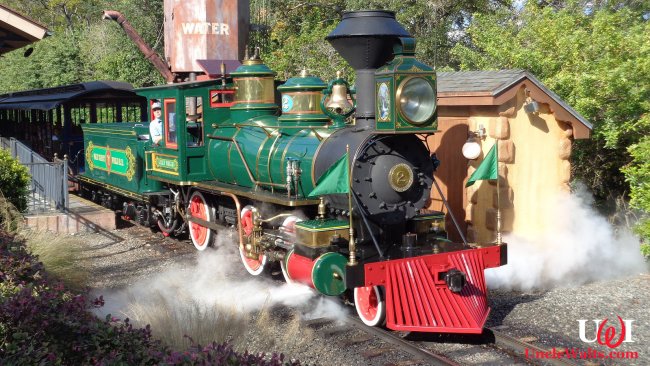 “Yes, we are retheming another attraction to Tron. But not the Speedway.”

WALT DISNEY WORLD, FL — The Magic Kingdom Park took another step towards construction of the new Tron Lightcycle Power Run roller coaster last week, shutting down the Tomorrowland Speedway and the Walt Disney World Railroad for the duration of the construction. And now Uncle Walt’s Insider has learned that the Railroad is not just being refurbished during its closure — it is being fully rethemed as another Tron attraction!

Since the announcement of the new Tron coaster last summer, rumors have abounded that the Tomorrowland Speedway would get a Tron-themed makeover. It is, after all, an attraction that seems a bit out of place in a land that celebrates the future.

Disney (the company) spokesperson Jun Disney (no relation) tells Uncle Walt’s Insider that that’s not the case: “Yes, we are retheming another attraction to Tron. But not the Speedway. It’s the steam trains that are really out of place in Tomorrowland.”

Disney (no relation) reveals that the lovingly-restored and -maintained steam engines are getting the heave ho: “No more non-futuristic smoke and noises for us. Instead, we’re partnering with Tesla to produce all-electric, self-driving train engines, and our Imagineers have some incredible designs for the look for the engines and the passenger cars — all white and light gray, with sleek curves and glowing neon stripes and inserts. It’ll look amazing, especially at night. Oh, and the tracks will glow, too!”

Won’t that futuristic train look out of place at its Main Street USA station, we wondered? Or passing through Frontierland? Disney (no relation) wasn’t worried. “Hey, it’s looked out of place in Tomorrowland since 1971. We’ll worry about all that in another 47 years.”

No official word yet on the rumored Tron overlays for the Tomorrowland Transit Authority or the Mad Tea Party, or how Disney will adapt its popular Backhead Cuisine dining experience to the new electric trains.

What other attractions should be Tron-themed? Let us know in the comments below!

August 20, 2018 by Marty in Florida
© 2020 Uncle Walt's Insider. All rights reserved. All images used with permission. Unless otherwise attributed, all images licensed under Creative Commons CC0 license. This site is protected by reCAPTCHA and the Google Privacy Policy and Terms of Service apply.