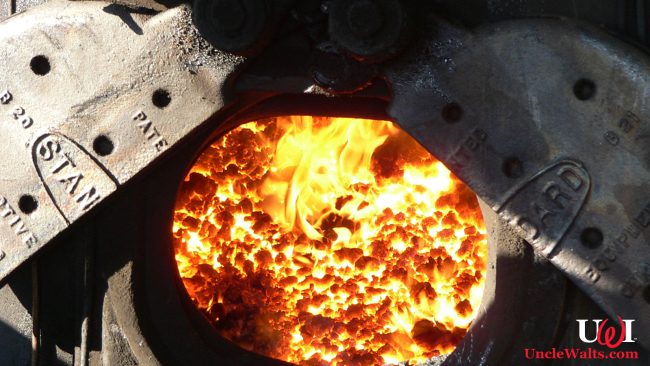 Those steam engine fireboxes generate a lot of heat — so why not cook with it?

As everyone in the universe is aware, the Walt Disney World Resort maintains a fleet of authentic, antique steam trains. These trains require large amounts of heat to generate large amounts of steam to not only power the locomotive, but also run the steam press to iron out the wrinkles on all of the costumes worn by the Cast Members. The Imagineers at Disney, who are always looking for efficiency, and profits, have come up with a new way to feed guests (and increase revenue) with the Magic of the Steam Trains Backhead Cuisine dining experience!

Guests will place their order at Main Street Station and then the crew operating the train will expertly cook their order on the engine’s backhead. After a full-circle tour of Walt Disney’s Magic Kingdom, the meal will be ready to serve. Guests will then be asked to disembark the train, collect all of their belongings, including their meal, and exit the station. This is due to the no eating, no drinking, no smoking, and no flash pictures, please, rules of the railroad.

Menu items will include hamburgers with bacon, chicken sandwich with bacon, bacon wrapped scallops, Lobster Thermidor (with bacon), and Walt’s favorite, a can of Hormel Chili. Prices start at $79.99 for adults and $59.99 for kids. The Disney Dining plan accepted at two credits per meal. Advanced reservations are required and will open on August 11th.

Are you ready to try Backhead Cuisine? Let us know in the comments below!

Cover photo of a train’s firebox (it’s kind of like a stove) by Mark Pellegrini [CC-BY-SA-3.0] via Wikipedia.

July 17, 2018 by Walt in Florida
© 2020 Uncle Walt's Insider. All rights reserved. All images used with permission. Unless otherwise attributed, all images licensed under Creative Commons CC0 license. This site is protected by reCAPTCHA and the Google Privacy Policy and Terms of Service apply.