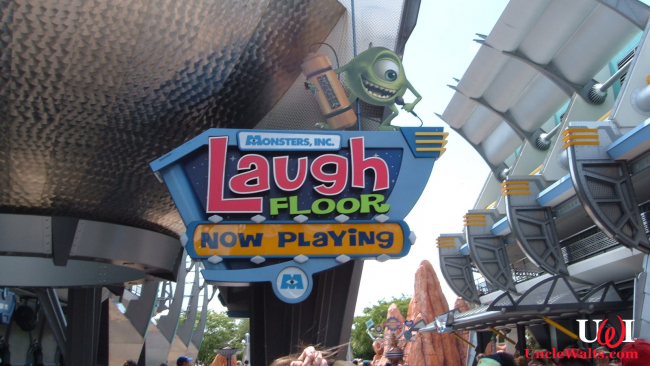 “Now it won’t just be the monsters that are blue.”

WALT DISNEY WORLD, FL — It’s an attraction that even the most generous Disney fans say has grown stale. But now Monsters Inc. Laugh Floor is getting “refreshed” with the addition of late-night shows filled with adult-oriented humor.

“There’s only so many times the average guest can tolerate Buddy Boil and his awful puns,” Disney (the company) spokesperson Jun Disney (no relation) tells Uncle Walt’s Insider. “So we’re changing things up. Now Monsters Inc. Laugh Floor showings that begin after nine p.m. will be limited to guests ages 18 and up, with adult-appropriate humor. We think it’ll drive up attendance and possibly attract a whole new kind of Disney fan.”

While this is a first for their theme parks, Disney (the company) has offered adults-only shows with mature material on their cruise ships for years, and the improv at Disney’s now-defunct Comedy Warehouse routinely veered into PG-13 territory. This will be the first time, however, that Disney or Pixar-related characters will be delivering the blue material.

“Hey, things change,” Disney (no relation) (the spokesperson) says. “I mean, you used to never have alcohol in the Magic Kingdom either, and it’s everywhere these days. So adding blue material is not that big of a deal. Now it won’t just be the monsters themselves that are blue.”

What new jokes will you be texting to the performers? Comment below!

August 7, 2018 by Marty in Florida
© 2020 Uncle Walt's Insider. All rights reserved. All images used with permission. Unless otherwise attributed, all images licensed under Creative Commons CC0 license. This site is protected by reCAPTCHA and the Google Privacy Policy and Terms of Service apply.