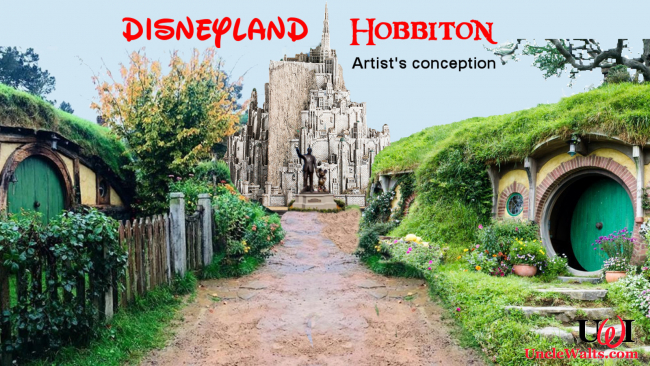 MATAMATA, NEW ZEALAND — It sounds like amazing, and too good to be true. Insiders within the Disney company and Peter Jackson’s Wingnut Films are passing along rumors that a new Disneyland-style park may be coming to New Zealand. Even better, the entire park will be both completely Disney, but themed to the Lord of the Rings stories and films.

Sure, this may sound completely made-up, and fans desperate for this to be true will be fact-checking this in all the wrong places. But Uncle Walt’s Insider has a track record you can rely on. Remember, we were the first to break the news of Disneyland Pyongyang, Disneyland Escanaba, the New Jersey Pavilion, and Universal Studios: Idaho!

According to our sources, guests first may be greeted at the gates by favorite Disney characters dressed as wizards, elves, and wraiths. Then you’ll walk down Main Street Middle Earth towards the iconic castle of Minas Tirith (pictured above).

From the hub in front of Minas Tirith, you’ll fight your way through hoards of orcs (or other guests; it’s often hard to tell) to your choice of the surrounding lands. Plans are for six separate lands when the park opens, each of them labeled “Adventureland.”

Insiders also suggest that plans for a future land, called Mordor, are in the works. While details of its location are not settled, it will almost certainly be reached by walking. Lots and lots of walking. However, for the return trip, a lucky few will be transported by eagles.

Watch here for further information as this story develops!

Will you simply walk into Mordor? Or would you prefer to fly, you fools? Comment below!

October 25, 2018 by Marty in World
© 2020 Uncle Walt's Insider. All rights reserved. All images used with permission. Unless otherwise attributed, all images licensed under Creative Commons CC0 license. This site is protected by reCAPTCHA and the Google Privacy Policy and Terms of Service apply.