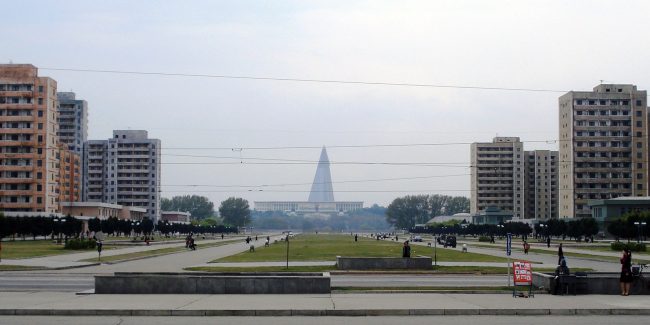 Shortly after halting construction on the previously-announced Disneyland Texas Resort last week, the Walt Disney Company today revealed its plans to build a Disneyland-style theme park in an unlikely location: Pyongyang, the capital of the Democratic People’s Republic of Korea.

Disney theme parks through the years

Disney in the “Hermit Kingdom”

“We just felt the time was right for a new park venture in that part of the world,” Disney Parks and Resorts spokesperson Lowell Jeffries told Uncle Walt’s Insider. “Yes, we know there’s tension involving North Korea at the moment. But we feel that a Disney park has a magical way of bringing people from all walks of life and political ideologies together. Who knows, this could be a real catalyst for healing and international understanding.”

Details of the deal are not publicly available, but likely include land, infrastructure, and cheap or free labor provided to the park by the North Korean state, in exchange for technology, in-park propaganda, rigid prohibitions against criticism of President Kim Jong Un or his government, and free churros for party officials. Insiders report the possibility that the park will be built in and around the unfinished Ryugyong Hotel in the heart of Pyongyang.

“The Imagineers love a challenge, and converting an empty 105-story pointy building into a castle would certainly be a challenge,” Jeffries confirmed. “But can you imagine how cool the nightly projection and fireworks show would look on that thing?”

Surprisingly, no public statements have been made by the South Korean government or the various human rights organizations that are usually critical of deals involving the Hermit Kingdom. After contacting the South Korean foreign affairs office, Uncle Walt’s Insider spoke with assistant to the director Ha-Yun Jeong, who stated simply, “If sanctions haven’t worked, maybe Mickey Bars can bring world peace.”

November 15, 2017 by Marty in World
© 2020 Uncle Walt's Insider. All rights reserved. All images used with permission. Unless otherwise attributed, all images licensed under Creative Commons CC0 license. This site is protected by reCAPTCHA and the Google Privacy Policy and Terms of Service apply.