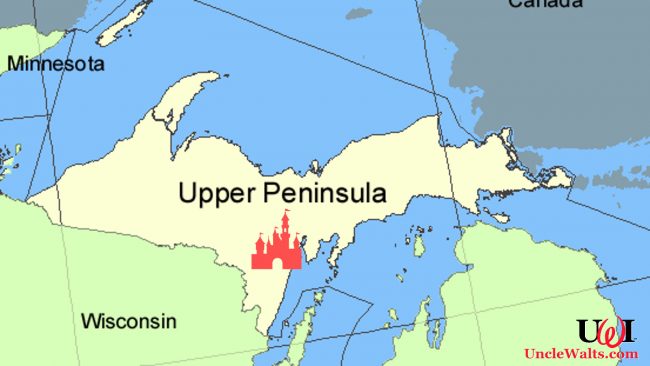 This is gonna be good!

UNCLE WALT’S HEADQUARTERS, SVALBARD — Now that the initial excitement (or outrage) about the new Disney theme park in Escanaba, Michigan has subsided, we put in a Skype call to our favorite Disney spokesperson, Jun Disney (no relation) to see if there are any new details that we can share with our readers. She mentioned that while there’s not much that’s been finalized yet, there were a few new details, and unfolded a sheet of paper. [Ed.: Get it? Unfold? And the title of the article … Oh never mind]

Disney (no relation): “The more we talk about it the plans, the more excited we get. We’re really doing a lot of things for the first time. For example, we’re the first company to build a major theme or amusement park on the shores of a Great Lake.”

Disney (no relation): “And we’ll be the first ones to have a roller coaster actually looking out over the water!”

UWI: “What about Cedar Po–“

Disney (no relation): “There’s really a lot of great things we can do, and a lot of really cool tie-ins. The Yooper Dooper will be an awesome roller coaster. I can’t tell you a lot about it yet, but it’s going to be themed to Michigan’s rich history. Did you know that Escanaba used to be a prominent logging town? We’re going to try to tie that into the ride’s backstory. And we’re going to have an show about the Toledo War, in which Michigan won the Upper Peninsula from Ohio. It’s going to be an animatronic show, kind of like The American Adventure, except without Ben Franklin.

“We are planning on a lot of locally-sourced food options. Our Chef’s Planning Commission is absolutely amazed by how much great local product they can get. They’re already talking about fresh apple cider for the fall, and saying that they’re only going to serve Kellogg’s cereals. They’re talking about buying all their baked goods from Zingerman’s, but they’ve also mentioned baking them in-house using only Jiffy Mix, so I’m not sure where they landed on that one. Plus, there’s even a debate on which Michigan-based pizza company we should serve. I didn’t even know this, but Domino’s, Little Caesar’s (the official pizza of the Detroit Tigers), Hungry Howie’s [Ed.: Check the link, I think that’s Hungry Hippos], and Cottage Inn Pizza (The Big Ten’s best pizza) all started in Michigan.

“I’d love to tell you more, but I need to go. Kid Rock called, and I need to call him back.”

UWI: “Kid Rock? Will he be performing?”

Disney (no relation): “Nothing is finalized. We’re talking about having a band that only plays covers of Michigan artists. Kid Rock, Bob Seger, Eminem, Aretha Franklin, Diana Ross, and a whole bunch more. But, no. This call is because my bosses asked me to re-write ‘Listen to the Land‘ but replace land with sand, to advertise our sand-castle competition at the hotel. I can write a press release like nobody’s business, but I can’t write song lyrics to save my life. All I can come up with is ‘Go pound the sand,’ but that’s not something we want to use. If you ask me, they should’ve just licensed the rights for ‘Sandcastles In The Sand.’“

UWI: “Thanks for your time.”

Are you excited about Disney Escanaba? Let us know in the comments below!

September 1, 2018 by X in Other, World
© 2020 Uncle Walt's Insider. All rights reserved. All images used with permission. Unless otherwise attributed, all images licensed under Creative Commons CC0 license. This site is protected by reCAPTCHA and the Google Privacy Policy and Terms of Service apply.