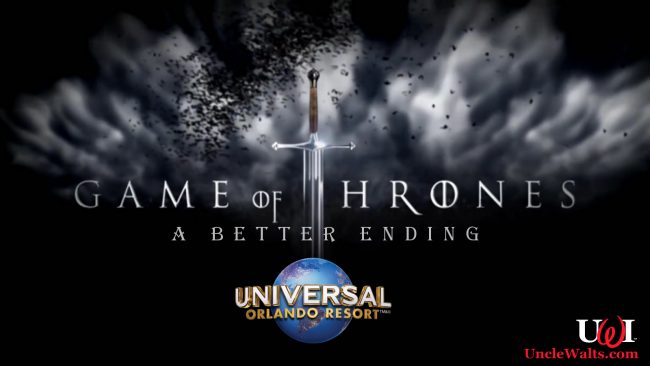 The only story option not available will be the one that aired on HBO.

ORLANDO, FL — Universal Orlando Resort has announced an upcoming attraction that has fans of HBO’s Game of Thrones buzzing.

The new ride, to be a 3-D motion simulator (of course), will transport guests to Westeros and immerse them in the world of the Seven Kingdoms. Even more exciting, the attraction will have interactive elements that allow fans to choose a new ending for the series.

“When we put together this ride,” says Universal (the company) spokesperson Junie Versal (no relation), “we asked ourselves, ‘What is it that Game of Thrones fans really want to experience?’ Sit on the Iron Throne? Boring, and with little repeat appeal. Ride a dragon? It’s been done.”

“The most important thing”

“No, obviously — and we mean obviously,” Versal (no relation) emphasized, “the most important thing to GoT fans is to get that awful series finale out of their heads. So we are going to give them the chance to rewrite history and find a better ending.”

Versal (no relation) says the ride will be fairly easy to create.

“All we have to do is not allow the riders to choose the actual ending. Anything else is an improvement.”

Are you looking forward to an animatronic Peter Dinklage as much as we are? Let us know in the comments below!

Cover photo: To be known as GoTaBE from here on out. Photo by Global Panorama [CC BY-SA 2.0] via Flickr, modified.

September 12, 2019 by Marty in Florida
© 2020 Uncle Walt's Insider. All rights reserved. All images used with permission. Unless otherwise attributed, all images licensed under Creative Commons CC0 license. This site is protected by reCAPTCHA and the Google Privacy Policy and Terms of Service apply.