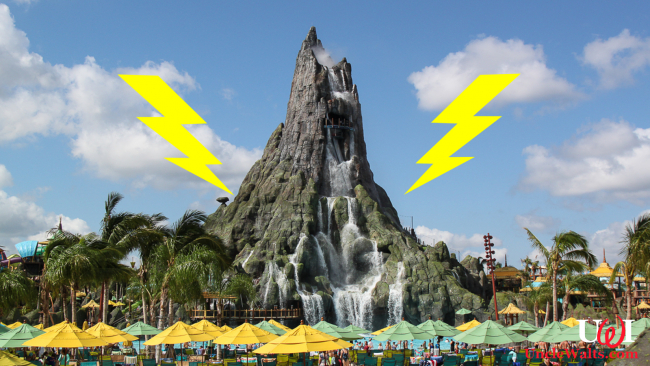 The Volcano Bay shocks were not an accident.

ORLANDO, FL — Guests visiting Universal Orlando’s Volcano Bay were recently subjected to low-level electric shocks while visiting the various pools, water slides, and spas. Park officials first pointed their fingers to cost-cutting and not following code during construction of the park. But thanks to some real investigative reporting, Team UWI is bringing you the truth behind this shocking news. [Ed.: Heh, “shocking.”]

Universal is shocking its guests on purpose.

First, the back story

When Universal Orlando first announced they were bringing the Wizarding World of Harry Potter to their parks, it sent Disney executives into a frenzy.

Disney tried everything to woo guests to Walt Disney World when the Harry Potter Land and Spa first opened. This included deep hotel and ticket discounts, and unique Disney experiences. What finally saved them? Free churros, which of course were coupled with a $35 handling fee. Guests were happy to pay the handling fee for a free churro, so Disney did not have to shut down the world’s top vacation destination.

Disaster was averted, and then Disney began planning their revenge against Universal. What could possibly be more attractive to people than butter beer? That’s right, blue milk and the amazing world of Star Wars!

So Galaxy’s Edge‘s is open at Disneyland and coming soon to Florida. Universal officials now understand exactly what this means for their theme parks and spas. Guests are already cancelling plans to visit Universal Hollywood in favor of visiting the Disneyland Resort & Spa.

Photo and videos coming out of Universal City are showing the last few guests visiting the park riding virtually alone on all of the major attractions. Universal has even started handing out free butter beer — without a handling fee! Despite these offers, it is not enough to stop the drawing power of Star Wars: Galaxy’s Edge.

Universal officials consulted with top scientists from around the world and came up with a plan. The best thing they can do is just make guests forget that there is anything fun outside of Universal Orlando! Park officials turned on low-level shocks on their water slides on Sunday, June 2. They hoped the shocks would make guests forget about Star Wars, and think more about Harry Potter.

We reached out to Universal (the company) spokesperson Juni Versal (no relation) for an official comment.

“At least we have something. Sea World is hoping for another corporate sponsor like Gorton’s Seafood, otherwise they are going to have to start selling off their animals to the highest bidder (like Gorton’s Seafood). Word on the street is the restaurants at the Norway, Japan, China, and New Jersey pavilions at Epcot are lining up with huge cash offers.

Would you try electroshock therapy to get over eating a cream cheese pretzel? Comment below!

June 15, 2019 by Walt in California, Florida
© 2020 Uncle Walt's Insider. All rights reserved. All images used with permission. Unless otherwise attributed, all images licensed under Creative Commons CC0 license. This site is protected by reCAPTCHA and the Google Privacy Policy and Terms of Service apply.