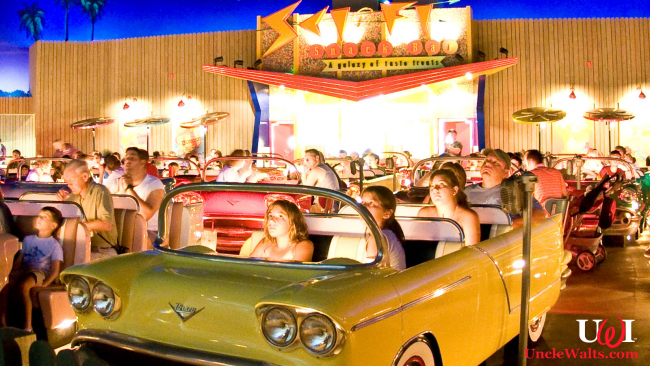 Will Disney still let kids sit in the drivers’ seats?

DISNEY’S HOLLYWOOD STUDIOS, FL — The Sci-Fi Dine-In Theater Restaurant was closed for the busy lunch rush yesterday due to a massive, multi-car pileup, which occurred just after the first seating. The Reedy Creek Fire Department & Spa were called in to deal with the carnage. Thankfully there were no reported injuries, as guests were properly restrained and remained seated while the car was in motion.

“I had stopped in to see [Sci Fi Cast Member] Ashley. I have a crush on her, I don’t know if she likes me, but I like to step in and talk to her at the hostess stand. She is really nice to me, so I think she might like me. I’m saving up enough money so I can take her out on a romantic dinner at Applebee’s in Epcot. My friend Carl told me that the New Jersey state motto is ‘New Jersey is for lovers‘, so as soon as I make enough money to cover entry costs into Epcot and the add-on ticket for the New Jersey Pavilion, then I’ll ask her out. I just hope that Steve, who works at Guardians of the Caribbean, doesn’t ask her first. He’s really cool, and works at the best attraction that Disney has to offer.”

Get on with it

So, the accident, we asked?

“Oh, yeah. So like 97 cars all ran into each other, and food and drinks went everywhere. One of the waitresses lost about 6000 plastic straws, and of course straws are now a Class A Biohazard. So cleanup took longer since the area had to be declared contaminated and we were called in. We’re the only ones trained to deal with that amount of plastic.

“I just threw them into the regular trash. We sort everything backstage, so no need to find a recycling bin. Ashley wasn’t phased by it at all, and her hair smelled fantastic.”

Despite the amount of straws that needed to be cleaned up, and a bunch of spilled drinks due to lack of plastic lids, the Sci-Fi Dine-In Theater Restaurant & Spa quickly re-opened about 25 minutes later. Guests with advanced reservations were given free popcorn while they waited.

We reached out to Disney (not Jun) for comment, but they just referred us to their legal team and referenced a restraining order.

Do you think Chuck has a chance with Ashley? Let us know in the comments below!

Cover photo of the Sci-Fi Dine-In Theater restaurant moments before the tragedy (or after, we’re not sure) by Josh Hallett [CC BY-SA 2.0] via Wikimedia Commons.

August 31, 2018 by Walt in Florida
© 2020 Uncle Walt's Insider. All rights reserved. All images used with permission. Unless otherwise attributed, all images licensed under Creative Commons CC0 license. This site is protected by reCAPTCHA and the Google Privacy Policy and Terms of Service apply.