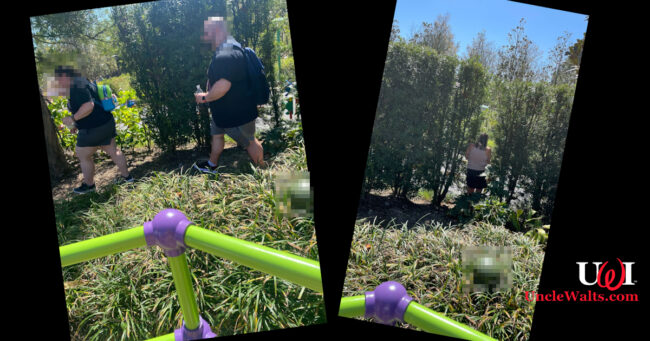 Pictured above: guests in the foliage.

DISNEY’S HOLLYWOOD STUDIOS, FL — During a recent visit to the Walt Disney World Resort and Spa and Savings Vacuum, our own Uncle Walt experienced incredibly long attraction Stand-By queues — so long that the lines stretched off the paths and into the landscaping!

Because of the recent cash-grab scam [Ed.: Well, one of them] perpetrated by Bob “Bob” Chapek, Lightning Lane, guests at the Disney Parks, Resorts, Spa & Labor Camp have encountered even longer than normal Stand-By queues. Cast Members have (probably) been told to hold up the Stand-By queue as long as they can so guests will get tired of waiting and spend money on Lightning Lane.

Walt explained, “Boys, it was so long that they ran out of queue space and had to send guests through the foliage.  I knew the lines would be bad, but I did not know they would be this bad.”

We don’t talk about Julie

A Cast Member named Julie who wishes to remain anonymous [Ed.: Please do not read Julie’s name. We appreciate it, and so does Julie!] spoke with Uncle Walt.

“Oh yeah, it’s bad,” our source told us. “First we sent guests backstage, until a riot almost broke out after they saw a Cast Member throwing away day old churros. I witnessed it once, took me months to walk by that dumpster again.

“So after that, management said we can’t have guests wandering through queues backstage. I mean, first the magic is gone, but what if they realized they could just duck under the rope and get out of the queue?! So now we’ve been told to send the guests through the bushes and such. Keeps them on-stage and out of areas where Chapek might be hiding. We all know he has an aversion to actually talking to guests and hearing about their experiences with his cash grab schemes.

“Please don’t print that last part, and please make sure you cover up my name.” Thanks, Julie, we will.

Did you get sent through the bushes? Let us know in the comments below!

April 2, 2022 by Walt in Florida
© 2020 Uncle Walt's Insider. All rights reserved. All images used with permission. Unless otherwise attributed, all images licensed under Creative Commons CC0 license. This site is protected by reCAPTCHA and the Google Privacy Policy and Terms of Service apply.