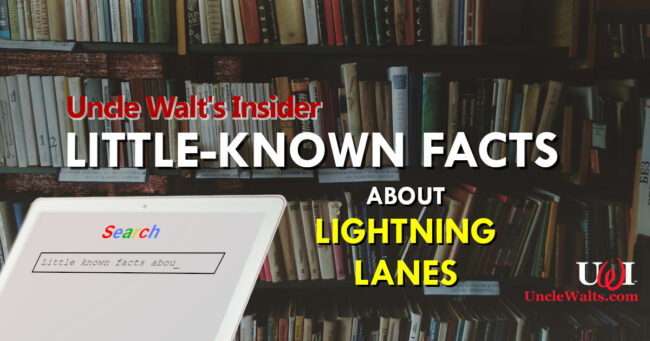 Our little-known facts series continues (in spite of underwhelming demand)!

Fastpass, Fastpass+, MaxPass, MaxiPass, and extra-absorbent MaxiPass are all no more (except, of course, at the Disney Yesterland Theme Park and Spa). They’ve been replaced by something called Genie+ and “Lightning Lanes.”

They are named for the famous explorer, Dr. Albert Lane.

And his wife Penny, and their kids Fast, Express, and 15 Items or Less.

There is no discount to use them if your name is Lane.

The Lightning Lanes were first discovered by Benjamin Franklin.

While flying a kite during a storm at Disneyland.

The odds of being struck by lightning are approximately the same in the Lightning Lane and in the Standby lane.

The odds do go up significantly if you are flying a kite.

The USPS does not recognize Lightning Lane as a valid address.

They’ll come around, since they do recognize “Main Street” in many places.

The Lightning Lane can accelerate from zero to sixty in 2.8 seconds.

That’s why the wait is shorter. Do try to keep up.

We haven’t figured out what it is yet, but we do find the Faraday cage surrounding every Lightning Lane to be slightly concerning.

Guests in the Lightning Lanes will be able to purchase tinfoil hats.

If they’re nervous about the Faraday cages.

The secret word is “Ka-chow!”

This lets you in to any Lightning Lane at any time, without paying for Genie+. Don’t tell Bob “Bob” Chapek.

Speaking of Chapek, Lightning lane is not just a cash grab by Disney.

It’s a cash grab+ by Disney!

November 1, 2021 by Marty in California, Florida, Spotlight
© 2020 Uncle Walt's Insider. All rights reserved. All images used with permission. Unless otherwise attributed, all images licensed under Creative Commons CC0 license. This site is protected by reCAPTCHA and the Google Privacy Policy and Terms of Service apply.