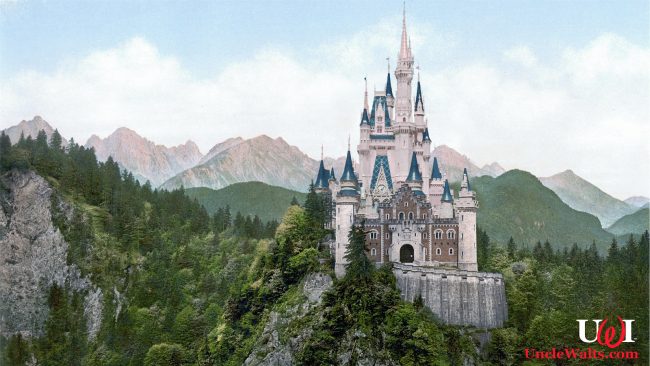 The historic Bavarian landmark will look even more familiar when Disney is done.

In April, Uncle Walt’s Insider reported that the Walt Disney Company had acquired Neuschwanstein Castle, intending to build a new “Disneyland Bavaria” around it. At the time, it was rumored that the iconic building would be rethemed to Guardians of the Galaxy, like every other Disney theme park building.

It turns out, though, that Disney will go with a more recognizable look when giving the castle a makeover.

Disney (the company) spokesperson Jun Disney (no relation) tells Uncle Walt’s, “We seriously considered retheming it to Tron, since that’s all the rage right now in the company. That’s would I would’ve voted for, if I had a vote. Which I don’t.

“We also considered leaving it as is, because, you know, history and stuff. That idea didn’t get far. I mean, as a castle, it’s cool-looking, but it doesn’t totally say ‘Disney’ when you look at it. So we thought, hey, let’s make it even more familiar to our guests.”

The retheming of the newly-dubbed “Cinderellschwanstein Castle” is expected to be completed by the time Disneyland Bavaria opens next Fall.

Cover photo, an artist’s conception of the remodeled “Cinderellschwanstein Castle,” from Pixabay & Pxhere.

August 21, 2018 by Marty in World
© 2020 Uncle Walt's Insider. All rights reserved. All images used with permission. Unless otherwise attributed, all images licensed under Creative Commons CC0 license. This site is protected by reCAPTCHA and the Google Privacy Policy and Terms of Service apply.