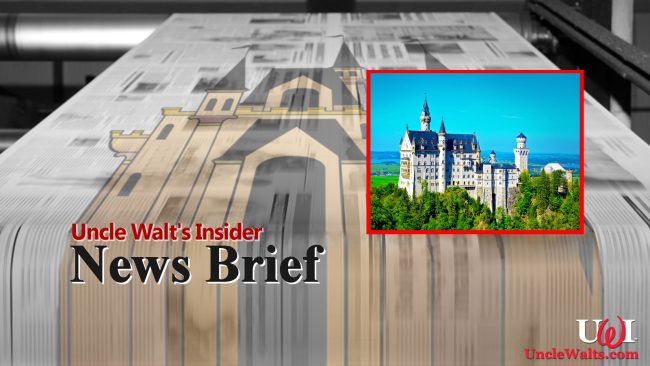 History comes full circle, as Disney now owns the inspiration for its own theme park castles.

BAVARIA, GERMANY — A real-life fairytale castle, long said to be the model for Sleeping Beauty Castle at Disneyland and later Disney castles, is now in the hands of Mickey Mouse. The Walt Disney Company announced yesterday that it had acquired the picturesque 19th-century castle set in the foothills of the Bavarian Alps.

“We’ve built fiberglass castles, inflatable castles, and stone castles,” Disney spokesperson Jun Disney [no relation] tells Uncle Walt’s Insider, “but they’ve always been our own creation. This time we’re going to build a park around an existing castle. It’s an exciting ‘first’ for us.”

There is no reported date for the opening of Disneyland Bavaria, but Uncle Walt’s has confirmed that the Neuschwanstein Castle will likely be rethemed to the Guardians of the Galaxy.

Inset photo of Neuschwanstein Castle, the centerpiece of the new Disneyland Bavaria, by Preetam Chakraborty [CC BY-SA 4.0] via Wikimedia Commons.

April 10, 2018 by Marty in World
© 2020 Uncle Walt's Insider. All rights reserved. All images used with permission. Unless otherwise attributed, all images licensed under Creative Commons CC0 license. This site is protected by reCAPTCHA and the Google Privacy Policy and Terms of Service apply.