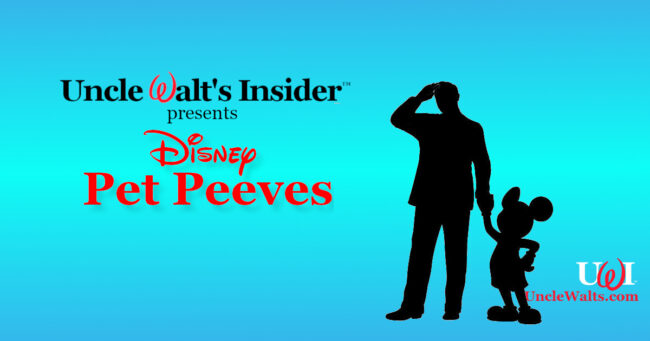 In spite of what Uncle Walt insists, Disney is not perfect. (Yet.)

Does anyone not like Disney parks? No! Everybody in the world loves Disney wholeheartedly. [Note: Just like on Facebook and Twitter, anyone commenting with an opinion to the contrary will be suspended for spreading disinformation.]

But is Disney perfect? Maybe, but there are still a few things that bug us when we go to Walt Disney World or Disneyland, or any of the 37 other Disney parks around the world. (Can you name them all?)

So here are some of our biggest Disney Pet Peeves:

People who put the apostrophe in the wrong place when writing ‘Ohana.

That bench at Magic Kingdom whose back right leg is just slightly smaller than the other legs.

No, not that one. The other one.

You’d think they’d have figured it out by now!

It’s probably due to radiation from all of those Harry Potter wands they sell.

People who are actually impressed with the food at Be Our Guest.

The Grey Stuff is good, sure. But delicious? No.

Skyliner gondolas keep crashing into each other.

Though maybe they could just start advertising them as “Bumper Gondolas” and turn it into an attraction.

X still hasn’t been able to ride in the Chip and Joanna Gaines skyliner cabin.

Marty has. And it is glorious.

When Uncle Orville walks out without his towel.

That was the last time we rode Carousel of Progress, let me tell you!

Though to be fair, those are streetmosphere characters doing the mugging.

Yeah, sure, they blame harsh winters and the pandemic for the setbacks. But come on, you knew the Upper Peninsula was a land of cold and pestilence when you decided to build there.

All of those “Hidden Mickeys.”

If you are going to put a Mickey on something, just do it. We don’t have time to stand around and look for it..

The burnt ketchup smell in the western Utilidors.

Oh, is that what that smell is?

We keep getting kicked out of the Utilidors.

Look, Disney, if you hide Mickeys and expect us to look for them, don’t be surprised if we also look for other things you hide, like entrances to off-limit areas.

They’re just the worst, aren’t they?

Do you have a list of Disney Pet Peeves? Let us know in the comments below!

June 25, 2021 by Marty in Spotlight
© 2020 Uncle Walt's Insider. All rights reserved. All images used with permission. Unless otherwise attributed, all images licensed under Creative Commons CC0 license. This site is protected by reCAPTCHA and the Google Privacy Policy and Terms of Service apply.