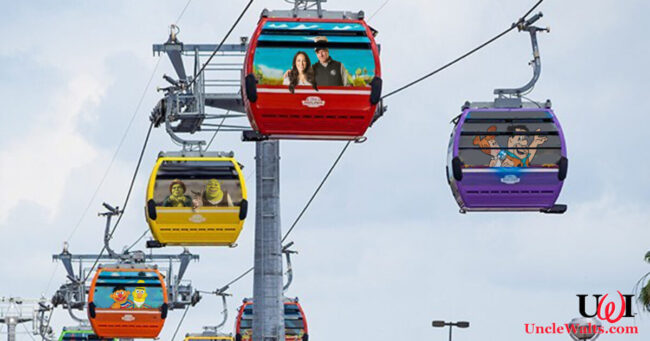 Walt Disney World’s new gondola system has… too much character?

WALT DISNEY WORLD, FL — Just months from its projected opening, the Disney Skyliner and Spa gondola system has encountered a new snag. Rather than leave the vehicles wrapped as originally planned, they decided to decorate each ride vehicle with cartoon characters.

One problem: no one told the designers that they were limited just to Disney characters.

Ride vehicles show characters from such non-Disney properties as Shrek, the Flintstones, H.R. Puff-n-stuff, Star Trek: the Animated Series, He-Man and the Masters of the Universe, Sesame Street, and for some reason, Chip and Joanna Gaines from Fixer Upper. [Ed.: We thought Chip Gaines was a Disney character.]

Disney (the company) spokesperson Jun Disney (no relation) had a brief response: “Oops.”

The opening of the gondola system is expected to be delayed for several additional months while new graphics are created.

UPDATE: There will be no delay after all! Disney (the company) has just solved the problem by buying all of the companies who own the previously non-Disney characters!

Wait, is the Anastasia gondola Disney or non-Disney? We can never remember. Comment below!

Cover photo: A few of the non-Disney gondolas. Photo by DisneyTouristBlog.com, used by permission, modified.

June 24, 2019 by Marty in Florida
© 2020 Uncle Walt's Insider. All rights reserved. All images used with permission. Unless otherwise attributed, all images licensed under Creative Commons CC0 license. This site is protected by reCAPTCHA and the Google Privacy Policy and Terms of Service apply.