17 little-known facts about the "Beacon of Magic" lights at Epcot! - Uncle Walt's Insider

17 little-known facts about the “Beacon of Magic” lights at Epcot! 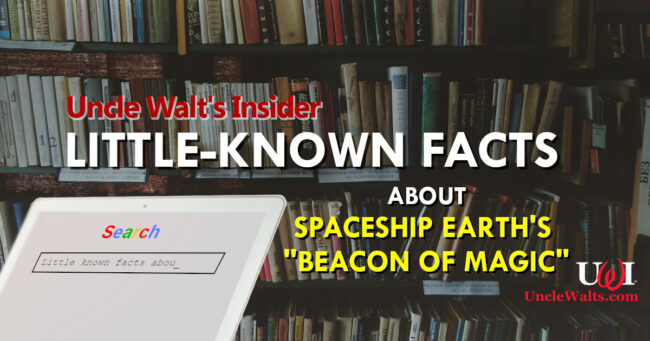 Tens, possibly hundreds [Ed.: We’d research actual attendance numbers, but that’s too much like work] of guests visiting the EPCOT Center Theme Park, Resort and Spa over the past few months have been dazzled by the new light show that’s been glued onto Spaceship Earth.

But do you know everything there is to know about this new “Beacon of Magic” light show? We at Uncle Walt’s Insider know everything about it. In fact, at least three of us have actually seen it with our own eyes! (Plus, there’s, like, YouTube videos.) So read on for some incredible, newly  -discovered trivia about the Spaceship Earth’s Beacon of Magic light show!

Or perhaps as a tribute to bacon, with really poor proofreading.

There is a flashing light warning for epileptics.

It’s posted in tiny letters on one of the support columns, and is only there at night when the lights are flashing.

Disney is contractually obligated to allow the US Government to use Spaceship Earth as a signal light in the event of war.

Pretty sure we saw the colors of the Russian flag up there recently. Hmmm…

Each light is powered by a single AAA battery.

Which need to be changed daily, of course.

Out of respect for Lilian Disney’s dislike of the hue, none of the LED lights can display the color green.

Every third blink is slower.

All of the lightbulbs were recycled from the long forgotten Epcot wand.

Finally it brings some good into the world.

One particular light on the southeast side, about nine rows up from the bottom, continuously flashes in Morse Code.

To raise money, Bob “Bob” Chapek is selling advertisements to be spelled out with the lights.

The first one is for Universal Studios.

During testing, lights numbered 35 and 42 suddenly became self-aware and had to be destroyed.

After park closing, the lights flip around and Spaceship Earth becomes a giant easy bake oven for churros.

Cast Members are sworn to secrecy about that one time the lights flipped during park hours and roasted every guest on the ride.

Park officials have vowed that Spaceship Earth will never again be used to destroy other theme parks. RIP Astroworld.

That’s no moon! We thought we felt a great disturbance in the Force back then.

The lights double as a bug zapper.

Now you know how Disney deals with mosquitos.

The lights are really annoying to the tenants of the new Spaceship Earth apartments.

We understand Chapek is offering to provide them with blackout curtains… for a price.

The lights provide food for feral cats in all four theme parks by blinding birds, who then fly into Spaceship Earth and die.

We recommend not walking under Spaceship Earth during a light show.

To date, the lights have caused partial blindness in at least four custodial Cast Members cleaning the exterior of Spaceship Earth.

To be fair, they weren’t wearing the recommended welding face shields.

Finally, during each light show, a team of two dozen specially-trained Cast Members stands in front of a wall of light switches, frantically flipping the switches in time with the music.

So far they’re too exhausted to protest or unionize.

January 29, 2022 by Marty in Florida, Spotlight
© 2020 Uncle Walt's Insider. All rights reserved. All images used with permission. Unless otherwise attributed, all images licensed under Creative Commons CC0 license. This site is protected by reCAPTCHA and the Google Privacy Policy and Terms of Service apply.