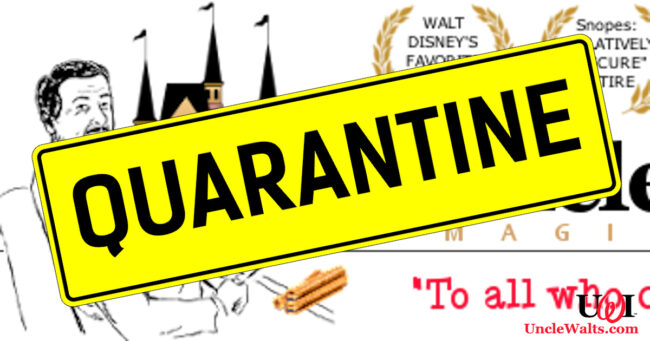 We’re at an elevated risk, since we go viral so rarely.

UNCLE WALT’S INSIDER H.Q., SVALBARD — The entire staff of Uncle Walt’s Insider has been quarantined in our Svalbard headquarters after one of our articles went viral recently.

As mentioned by completely non-political and unbiased website Snopes [Ed.: remember, we are satire.], a recent article we wrote was shared around the world and viewed millions of times. [We think it was the one about Six Flags opening a Hall of Vice Presidents. Or ice cubes being banned from Disney parks. We’re not sure. We didn’t get many questions about it.]

Running into Uncle Walt is hazardous under normal circumstance

So far, most of us have been able to endure the quarantine. It’s just like a normal day here, but with more sleeping. Our Uncle Walt did slip out at one point to spend a few days at Walt Disney World,* but other than that, we’re doing okay. [Ed.: We’re certainly showing no signs of going viral again!]

The quarantine is expected to last 14 days. Send churros.

*If you were at Walt Disney World any time in the month of September, please quarantine yourselves immediately and notify your local health authorities. Uncle Walt is nice enough, but we don’t know where he’s been.

Would you like to quarantined with us? Let us know in the comments below!

Cover photo: We’re already sick… of each other. Quarantine sign [CC0] via Pixabay.

September 21, 2020 by Marty in Other
© 2020 Uncle Walt's Insider. All rights reserved. All images used with permission. Unless otherwise attributed, all images licensed under Creative Commons CC0 license. This site is protected by reCAPTCHA and the Google Privacy Policy and Terms of Service apply.