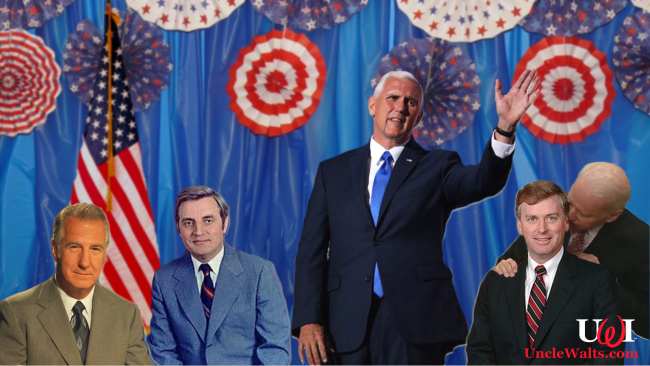 BOWIE, MD — In a not-so-subtle ripoff of the Hall of Presidents at Walt Disney World’s Magic Kingdom, Six Flags America has announced the opening of a “Hall of Vice Presidents” attraction.

As with all things Six Flags, the show is not quite up to the same quality level. The Vice Presidents are not full fledged audio-animatronics, but rather cardboard cutouts. A few with speaking roles have moving lower jaws.

In the initial version of the show, only three individuals give speeches. The current Vice President, Mike Pence, speaks, as do the Vice Presidents under George Washington (John Adams) and Abraham Lincoln (Hannibal Hamlin). All three speeches are about supporting their own presidents’ policies and attending state funerals.

Have you visited the Hall of Vice Presidents? What did you think? Let us know in the comments below!

Cover photo: A few of the VP cutouts in the new Hall of Vice Presidents. Photo courtesy Picryl, And NicePNG. And several other public domain sources.

July 17, 2019 by Marty in World
© 2020 Uncle Walt's Insider. All rights reserved. All images used with permission. Unless otherwise attributed, all images licensed under Creative Commons CC0 license. This site is protected by reCAPTCHA and the Google Privacy Policy and Terms of Service apply.