Hall of Presidents reopens; one President to be eliminated each week - Uncle Walt's Insider

Hall of Presidents reopens; one President to be eliminated each week 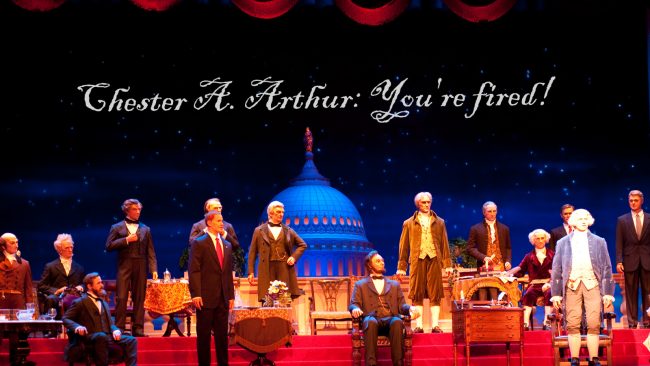 The Hall of Presidents, Disney’s tribute to all who have served as chief executive of the United States of America throughout history, reopened on Tuesday, December 19, at Disney’s Magic Kingdom Park in Florida. The newly-refurbished attraction not only adds current President Donald Trump, it now features enhanced projection, sound, lights, and a new twist — the elimination of one President each week.

Building on Disneyland’s animated tribute of Abraham Lincoln, Disney Imagineers created The Hall of Presidents in 1971 for the opening of the Walt Disney World Resort. The attraction featured audio-animatronic figures of each U.S. President, with many speaking and sharing “landmark moments” in the history of the United States. Each presentation is a stirring, patriotic experience for Magic Kingdom guests.

With every new President elected since the attraction’s beginning, the Hall has been shut down for a time to create and install a new animatronic figure of each newly-elected leader. Beginning in the 1990’s, each new President has recording a short speech for his doppelganger to deliver.

With the election of celebrity business man and reality TV star Donald Trump to the office in 2016, Disney Imagineers saw an opportunity to make radical changes to better gear the attraction for modern audiences. The Disney Parks Blog announced last week that the newly-reopened Hall of Presidents now features an Apprentice-style elimination each week, with one historical President “fired” from the attraction.

Guests viewing the attraction are given vote cards and pens by cast members on entering the Hall of Presidents. Each animatronic Presidential figure then has thirty seconds to argue for why they should stay in the Hall, based upon their accomplishments in office. Guests then record their vote for which President should be eliminated, and Cast members collect the vote cards. The President receiving the most votes at the end of each week is “fired” and immediately removed from the attraction.

Changes every week, not just every four years

Thomas Smith, Editorial Content Director of the Disney Parks Blog, is excited about the change. “For too long, the attraction has been static. Interesting, yes, but once you saw it, there wasn’t a need to return. It only changed when a new President was installed. Now, it’s different every week — guests will be coming back again and again to find out who was voted out, and if their favorite President is still there.”

But are their arguments for staying in the same, we wondered? “Oh, no,” Smith explained. “Every week their vote speeches and backbiting get more intense. It’s great fun. Franklin Pierce can be especially catty — he’s already started calling Carter ‘peanut’ and Lincoln ‘hat-boy’. I think he’ll be a crowd favorite and stick around a while.”

December 29, 2017 by Marty in Florida
© 2020 Uncle Walt's Insider. All rights reserved. All images used with permission. Unless otherwise attributed, all images licensed under Creative Commons CC0 license. This site is protected by reCAPTCHA and the Google Privacy Policy and Terms of Service apply.