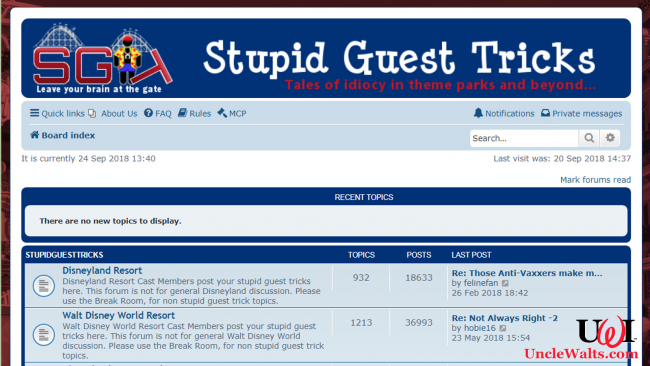 The rumored $1B buyout was modeled after Disney’s purchase of Go.com.

Stupid Guest Tricks, a website founded within minutes of the creation of the internet, is a forum-based discussion site which focuses on theme park stories and bad guest behavior. It reaches an estimated 7 billion people each week, or would if they would just put the address in their web browsers.

“The timing could not be better,” said our Uncle Walt, the Founder, Inspiration and Maintainence Supervisor for UncleWalts.com. “First, there were some kickbacks from getting Donald Trump’s name into a couple of articles. That plus the fact that Harriet hasn’t cashed her paychecks in months meant we had some spare cash.”

Stupid Guest Tricks made its name focusing on stories from Disney Cast Members and other theme park workers about, well, stupid guests. With the Uncle Walt’s buyout, however, its role may be expanding.

“The discussion forum will still be there,” says Uncle Walt. “But we have big plans for the website. It will be so much more than that.”

Changes will roll out slowly over the next few months.

“We plan to have a lot of travel advice there,” he continues, “because heaven knows theren’t aren’t enough theme park travel planning websites. We may add in ride videos. Marty has some recipes he wants to share, and maybe we’ll occasionally feature X’s tips on evading Disney security. It’s a work in progress.”

Crossovers are also a possibility.

Have you visited Stupid Guest Tricks before? Let us know in the comments below!

September 29, 2018 by Marty in Other
© 2020 Uncle Walt's Insider. All rights reserved. All images used with permission. Unless otherwise attributed, all images licensed under Creative Commons CC0 license. This site is protected by reCAPTCHA and the Google Privacy Policy and Terms of Service apply.