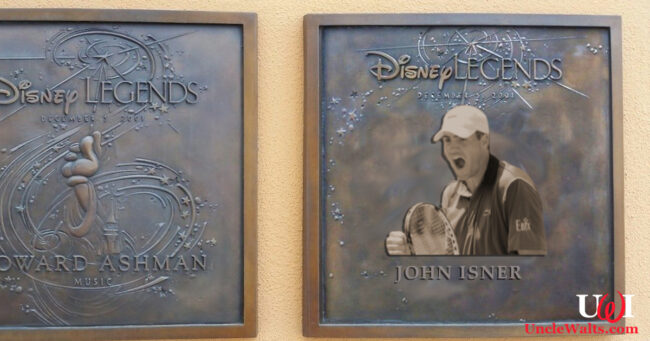 New plaques have been added to Legends Plaza

BURBANK, PEOPLE’S REPUBLIC OF CALIFORNIA — The Walt Disney Company has added plaques for the most recent class of Disney Legends to the pillars in Legends Plaza!

The Disney Legends award was established in 1987 to recognize individuals who have made an extraordinary and integral contribution to The Walt Disney Company. Recipients are honored with an award statue, a lifetime pass to all Disney theme parks, and a commemorative plaque to be placed on display in Legends Plaza at the Walt Disney Studios in Burbank.

The 2019 inductees to the Disney Legends program are widely talented, and widely known. Actress Ming-Na Wen, for example, is the only living person to have played a Disney Princess, Marvel Superhero, and a Star Wars character. Robert Downey Jr recorded the best known cover of Iron Man. James Earl Jones dropped a bomb on Russia, and Kenny Ortega is responsible for choreographing High School Musical.

However, the one surprise in the group seems to be John Isner. We checked, and could not find any solid connection between the tennis player and The Walt Disney Company. [Ed.: Maybe because he played some matches on ESPN?]

A Mistake at the Factory

“Yeah, it’s a mistake. We had intended to install a plaque of (former CEO) Michael Eisner. Apparently, when we called the plaque company, the guy on the phone wrote it down wrong. He wrote ‘Isner’ instead of ‘Eisner’. It’s an easy mistake. Anyone could make it. With the theme parks at drastically reduced capacity, the budget is stretched a little thin. So, we decided to just go with it. It’s not like Isner isn’t noteworthy. Apparently he’s a very good athlete.”

Isner and the rest join former Disney honorees such as The Simpson’s Mr. Burns, The Churro, Ella the feral cat, and of course our own Uncle Walt.

He did hit that tennis ball at the camera in the original Soarin’, right? Comment below!

March 9, 2021 by X in Other
© 2020 Uncle Walt's Insider. All rights reserved. All images used with permission. Unless otherwise attributed, all images licensed under Creative Commons CC0 license. This site is protected by reCAPTCHA and the Google Privacy Policy and Terms of Service apply.