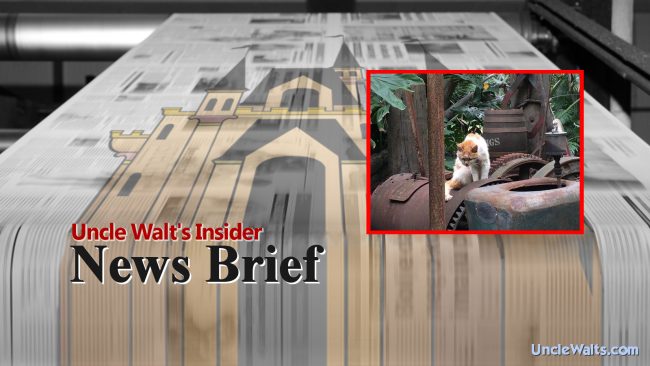 “Ella” is the first Legend who actually resides in a Disney park.

ANAHEIM, CALIFORNIA — A cat living in California’s Disneyland Park has been officially recognized as a Disney Legend in a recent awards ceremony, after the honor was announced last fall. The brown and white cat, known by some cast members as “Ella” for how she plays with mice (before eating them), has been living in the park for at least eight years.

The Walt Disney Company established the Disney Legends Award program in 1987 to recognize individuals who have made an extraordinary contribution to the entertainment company. Ella joins a horse and two pigeons as the only four non-human Disney Legends.

March 10, 2018 by Marty in Florida
© 2020 Uncle Walt's Insider. All rights reserved. All images used with permission. Unless otherwise attributed, all images licensed under Creative Commons CC0 license. This site is protected by reCAPTCHA and the Google Privacy Policy and Terms of Service apply.