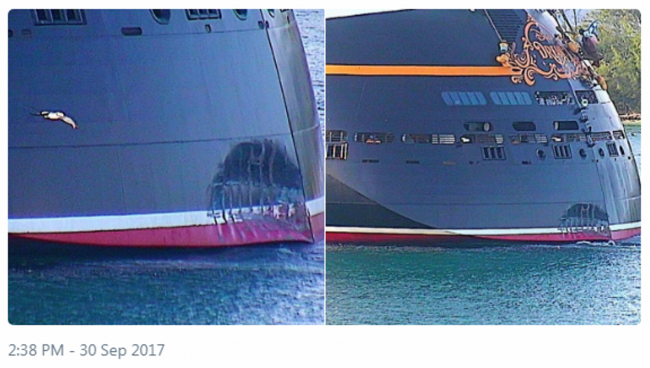 Disney Cruise Line confirmed today that the damage caused on September 30 to the Disney Dream (pictured above) was due to the cruise ship’s captain allowing his son to “practice parallel parking.” Company spokesmen refused to comment on any potential discipline, citing employee confidentiality. The damage has been repaired.

Documents have surfaced indicating that Doc from Snow White and the Seven Dwarfs never actually completed medical school. In a statement, the Disney Company insists that “Doc” is only a nickname, and the dwarf never actually claimed to be a doctor. Officials are questioning former patients.

A cat living in California’s Disneyland Park was named as a Disney Legend, the Walt Disney Company announced. The brown and white cat, known by some cast members as “Ella” for how she plays with mice (before eating them), has been living in the park for at least eight years.

Disney’s Animal Kingdom Theme Park has announced that one of the hippos featured on the popular Kilimanjaro Safaris ride is missing. Park officials stress that the animal is “probably just hiding” and that guests are in no danger.

Two entrees have been added to the lunch and dinnertime menus at Animal Kingdom’s Tusker House restaurant: “Grilled Kiboko Over Rice” and “Imvubu Stew.”

October 29, 2017 by Marty in California, Florida, Other
© 2020 Uncle Walt's Insider. All rights reserved. All images used with permission. Unless otherwise attributed, all images licensed under Creative Commons CC0 license. This site is protected by reCAPTCHA and the Google Privacy Policy and Terms of Service apply.