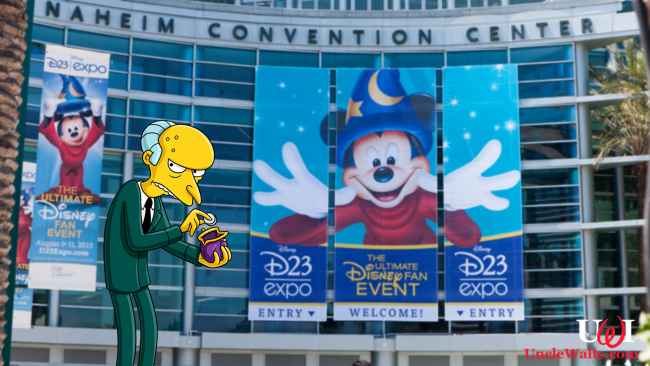 SPRINGFIELD, ?? — As many of you know, the Simpsons are coming to this year’s D23, Disney’s annual uber-fan expo. This confused some fans, as they are used to seeing The Simpsons at Universal Studios. In addition, Springfield businessman Charles Montgomery “Monty” Burns has been named a Disney Legend, bringing the number of 2019 recipients to 13.

So how is it are the Simpsons are invading Disney? Your crack team of reporters at Uncle Walt’s Insider have a strong suspicion about the reason, and also why Mr. Burns will now be called a Disney Legend.

When announcing Disney Legends, the company usually provides an extended biography and list of accomplishments for each new recipient. That was not done for Burns. That omission, coupled with the late addition of his name to the list, raised suspicions among the Disney faithful.

Uncle Walt’s of course immediately reached out to our favorite Disney (the company) spokesperson, Jun Disney (no relation). The question seems to have taken her off-guard.

“Oh, sure, uh, Mr. Burns,” says Disney (no relation). “That’s easy. It was because of his, uh… many… um, contributions to the Disney… bottom line, as well as, uh, to the… personal interests of the Disney Legends selection committee.

“Now, if you’ll excuse me, I have to catch a plane to Monaco for an… uh… investor’s meeting.”

How much would you pay to become a Disney Legend? Let us know in the comments below!

Cover photo: Mr. Burns will be named a Disney Legend at this year’s D23. Photo by Mooshuu [CC BY-SA 2.0] via Flickr, & the Disney branch of the Fox Corporation.

July 1, 2019 by Walt in Other
© 2020 Uncle Walt's Insider. All rights reserved. All images used with permission. Unless otherwise attributed, all images licensed under Creative Commons CC0 license. This site is protected by reCAPTCHA and the Google Privacy Policy and Terms of Service apply.