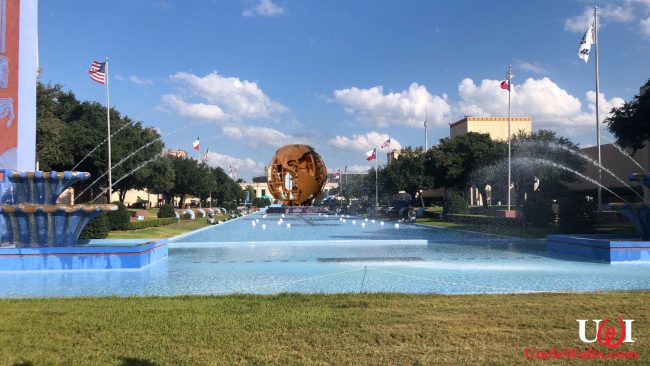 The new “Illuminations, Y’all: Reflections of Texas” debuts this weekend.

DALLAS, TEXAS — Texas fans of the Walt Disney World Resort and Spa are seeing some familiar gear at Dallas’s Fair Park lately. The video globe that once was the centerpiece of Epcot’s Illuminations fireworks show is the most recognizable, but apparently all of the fountains, lasers, barges, and other effects from the show have been packed up and sent to the State Fair of Texas.

“We are deeply grateful to the Disney company for their gift,” said Texas State Fair spokesperson Jun Fair (no relation).

“Apparently Disney’s a little short on storage space out there in Florida, so they asked if we could take some stuff off of their hands. Anything they couldn’t use in the new EPCOT Center Forever show got sent to us.”

Fair (no relation) says that a new nighttime show, highlighting the contributions of Texas to the world, will make use of the gear.

“Yep, we sure are thrilled with this new show, ‘Illuminations, Y’all: Reflections of Texas.’ And we’re using everything they sent us. Well, almost everything. We have other plans for the pyro barge during Texas-OU weekend. Don’t print that.”

What do you think they’ll use the pyro barge for? Let us know in the comments below!

Cover photo: The former Illuminations fountains and video globe at the State Fair of Texas. Photo by Walt, used without permission, and TheOneVader [CC BY-SA 3.0] via Wikimedia.

October 3, 2019 by Marty in Florida, Other
© 2020 Uncle Walt's Insider. All rights reserved. All images used with permission. Unless otherwise attributed, all images licensed under Creative Commons CC0 license. This site is protected by reCAPTCHA and the Google Privacy Policy and Terms of Service apply.