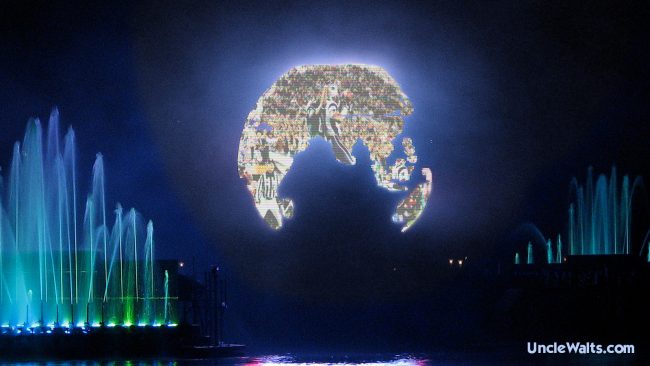 CMs who had to work during the big game got to see it after park closing.

Disney cast members are introduced to the saying “We work while others play” from the earliest days of their employment. As such, they are accustomed to having to miss out on a lot of things most people take for granted, such as holidays, sporting events, and adequate pay. But according to sources within the parks, Epcot employees who had to work during the February 4th airing of the Super Bowl were treated to an after-hours replay of the game — on the continent-shaped video screens of the Illuminations globe.

A salute to all nations, but mostly America

Illuminations: Reflections of Earth, Epcot’s incredible music and pyrotechnic show held nightly at the World Showcase lagoon, began in 1999. The show starts with an dazzling retelling of the first two chapters of the book of Genesis. It then traces the history of humanity, including the growth of society and technological progress. The last part of the show is a stirring musical call to peace and unity for the future, which will leave us weak and defenseless when the aliens come.

In addition to fireworks, lasers, floodlights, more fireworks, live pigeons, music, torches, churros, flamethrowers, and fountains, the show’s centerpiece is a 40-foot globe, with video screens comprising each of Earth’s continents. During the latter part of Illuminations, those screens display images of plants and animals, buildings, Walt Disney and a bunch of other people, handshakes, candles, and scenes from the “I’d Like to Teach the World to Sing” Coca-Cola commercial from the 1970’s.

As the world turns

It was on this video globe that Epcot cast members were treated to a re-airing of the Super Bowl after the park had shut down for the night. Sources report that the audio from the broadcast was pushed through the speakers surrounding the lagoon, and the globe continued to rotate, affording good viewing of the game from all around World Showcase, except from the New Jersey pavilion.

Although park officials implored cast members not to publicize the event — for many reasons, but mostly because the game aired on NBC and they didn’t have the rights to show it. But images leaked out, including the cover photo above. Sharp-eyed Disney fans also noticed that their My Disney Experience app briefly offered extra-cost “Big Game” dessert parties, viewing cruises, and Fastpass+ reserved viewing areas, all beginning at 2 a.m.

Although the experience was unique, the viewing surface did have its drawbacks. Epcot “Friendship boat” driver Matt Gerson noted that it could be difficult to follow the action as it moved through the rotating continents. This was particularly notable during controversial plays.

“Yeah, that Zach Ertz catch,” Gerson told Uncle Walt’s Insider. “He came down in the Atlantic Ocean, so we couldn’t tell whether the refs’ call was good or not.

“But if that’s a catch, so was Dez Bryant’s a few years ago,” Gerson, a Dallas native, added. “I’d like to see that game on the video globe to compare.”

At the end of the event, park officials had one final treat for the cast members: they fired off the Illuminations “holiday finale” barrage of fireworks because the Patriots had lost.

Would you have liked to see the big game on the globe? Comment below!

February 12, 2018 by Marty in Florida
© 2020 Uncle Walt's Insider. All rights reserved. All images used with permission. Unless otherwise attributed, all images licensed under Creative Commons CC0 license. This site is protected by reCAPTCHA and the Google Privacy Policy and Terms of Service apply.