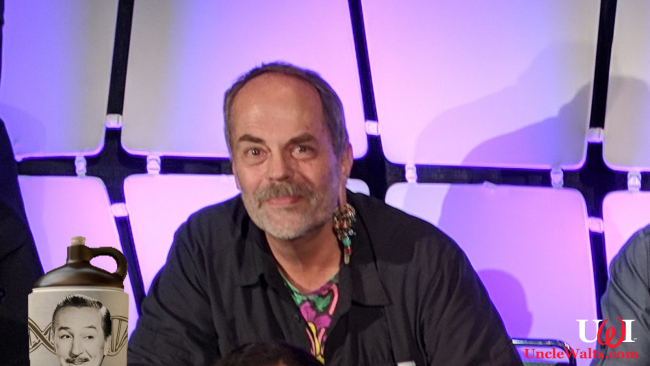 GLENDALE, CA — During a routine visit to Imagineering Headquarters in Glendale, CA, Uncle Walt Insider’s crack team of reporters discovered the secret behind Joe Rohde’s creative genius. Many believe it comes from the alien lifeform that dangle from his ear, but newly discovered information has this super reliable news organization changing our minds.

First, we spotted a bottle labeled, Joe’s Secret Magic Elixir – Don’t Touch! in a trash can right next to Joe Rohde’s desk. So we dug further.

We had to push aside a pile of papers labeled “Top Secret“, “Eyes Only“, “Fifth Gate Plans“, “Michigan’s UP Park Plans“, and “All of the attractions planned for the next 10 years.” But then we found something interesting! It was a small Post-It note with “Joe’s Creative Juice Recipe” written on top, and a list of ingredients below.

We’re entering it in the Betty Crocker Bake-off

In the interest of transparency, we felt it best to publish the recipe:

.
Blend together and garnish with a fresh churro

As soon as your UWI team can find out where to purchase Earl’s Grey tea, we’ll test this elixir and report back our findings!

Where can you find this mythical Earl’s Grey tea? Let us know in the comments below!

July 24, 2019 by Walt in Other
© 2020 Uncle Walt's Insider. All rights reserved. All images used with permission. Unless otherwise attributed, all images licensed under Creative Commons CC0 license. This site is protected by reCAPTCHA and the Google Privacy Policy and Terms of Service apply.