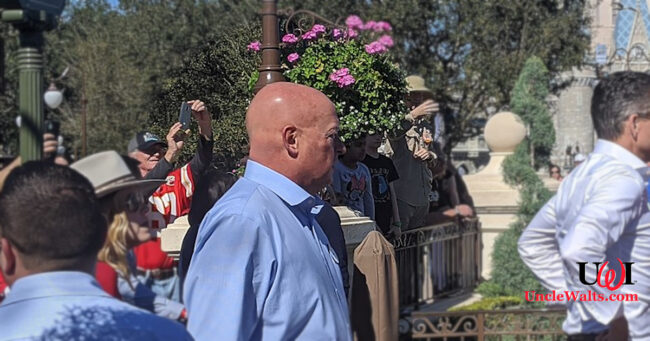 BR’ER BANK, CA — Only days after declaring that the struggling Disney Company would be facing staff reductions, a dejected Bob “Bob” Chapek was seen leaving its headquarters with a box of personal belongings (we’re assuming photos with Mickey and his favorite pieces of hate mail).

Disney (the company) spokesperson Jun Disney (no relation) claims the firing of Chapek as CEO was just a bit of bad luck.

“He was trying to make the layoffs fair,” Disney (no relation) told Uncle Walt’s Insider. “To keep from playing favorites, he put the names of all [estimated over 150,000] Disney employees on ping pong balls in one of those big lottery ball cages. His just happened to be the first one selected.”

Because of Disney corporate by-laws requiring all CEO’s to be named “Bob”, he is to be replaced by Disney CEO-for-Life Robert “Bob” Iger. Michael “Bob” Eisner could not be reached for comment.

We at Uncle Walt’s anticipate having Chapek at our doorstep begging for a job again at any moment.

Are there any other Bobs who should be given a shot as CEO? Let us know in the comments below!

Cover photo: Bob “Bob,” about to take his toys and go home. Photo by elisfkc2 [CC BY-SA 2.0] via Wikimedia.

November 22, 2022 by Marty in Other
© 2020 Uncle Walt's Insider. All rights reserved. All images used with permission. Unless otherwise attributed, all images licensed under Creative Commons CC0 license. This site is protected by reCAPTCHA and the Google Privacy Policy and Terms of Service apply.