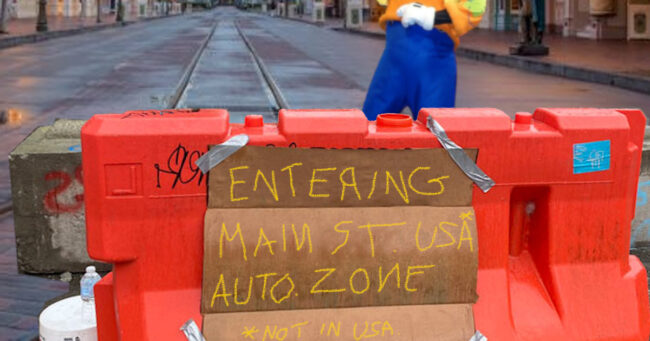 This might be revenge for Mickey taking the CEO job away from him.

Led by an individual calling himself goofy_fan_32, Disney-fan anarchists have set up their own Main Street U.S.A. Autonomous Zone (MSUSAAZ — not to be confused with MNSSHP or MSNBC). The barricades prevent Disney Security and Cast Members from driving up Main Street.

But she said it cheerfully

Disney Cast Member Scarla Johansson complained that she was unable to take the Horse Drawn Trolley or the Omnibus to Casey’s Corner, where she is a line cook. “It’s bad enough I don’t have a jitney like the Mayor rides around in. I have to take the Trolley or the Bus to get to work. Now what am I supposed to do? Walk in this heat and humidity?”

Johnansson isn’t the only Cast Member who is unhappy with the current situation. Main Street U.S.A. Fire Chief Smokey reported that the Fire Engine was unable to travel down the street as well. “What this is doing is putting the public in danger! Why, if there was a fire at the HUB, we wouldn’t be able to get there! The whole place could burn!”

Disney (the company) hasn’t issued a formal statement, and it is not clear at this time if this will affect the parks re-opening next month. [Ed.: I thought it wasn’t opening until 2025?]

Where should the next autonomous zone be setup? Let us know in the comments below!

Cover photo: A barricade at the entrance to the Main Street U.S.A. Autonomous Zone, which they’re claiming isn’t in the U.S.A.? Photo courtesy disneyparks.com, mynorthwest.com, & kennythepirate.com.

June 20, 2020 by Walt in Florida
© 2020 Uncle Walt's Insider. All rights reserved. All images used with permission. Unless otherwise attributed, all images licensed under Creative Commons CC0 license. This site is protected by reCAPTCHA and the Google Privacy Policy and Terms of Service apply.