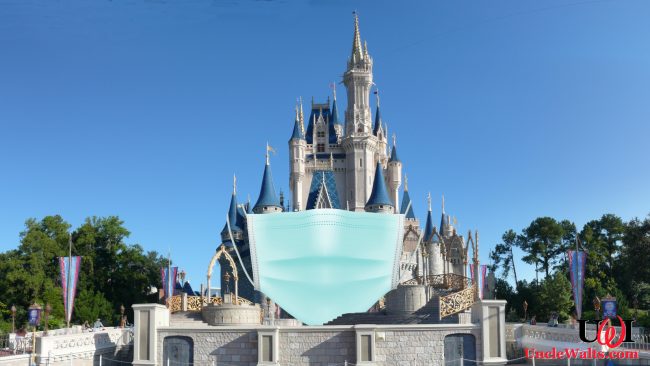 WALT DISNEY WORLD, FL — Disney announced plans for the reopening of Walt Disney World at the May 27th Orange County Economic Recovery Task Force (“M27OCERTF”). A “phased reopening” of the parks will begin in just over five years!

Jim McPhee (brother to Nanny McPhee), Senior Vice President of Operations for Walt Disney World, presented the plans. McPhee broke out into song –one written, of course, by Disney Legend Richard Sherman. It was a catchy number, a real toe-tapper.

The plans shows the two Kingdoms, Magic and Animal, re-opening on July 11, 2025. Hollywood Studios and EPCOT open a few days later. After the plans were presented to the M27OCERTF, and the task force completed its standard 15-minute, anything-goes shouting fest, the plans were approved.

Guests to the parks will be required to wear face masks that cover their mouth and nose. McPhee also said guests will be required to have their temperature taken. He then went off on a rant, saying, “It’s not a d*** rectal thermometer, as stated by WDWNTT, but a thermal scan. Stop dropping your pants!!!”

McPhee also said that the parks would be returning to the “pre-1998” FastPass system. For our readers who are not yet of drinking age, there was no FastPass system until 1999. Everyone had to wait in line at every attraction, and it was glorious. Even the most popular attractions rarely got above a 30 minute wait, except during the peakiest of peak attendance periods.

Guests who have a temperature higher than 100.3 degrees will be bused to Universal Orlando.

Social Distancing markers will be placed around the parks in the shape of Mickey Mouse. Guests will be able to purchase a map of these markers for $7.99. Upon finding, and marking on the map, all of the social distancing markers, they can trade it in for a valuable prize. (It’s a plastic cup, worth about 3 bucks.)

Guests who remove their face mask while in the parks will be placed in the Pillory at Magic Kingdom and publicly flogged. (This will mark just the second time that the Pillory has been used to imprison a guest at the Walt Disney World theme parks. During operating hours, at least.)

This should help Universal’s attendance

Any guest who passes out in the parks while wearing a mask will be dragged backstage and left there. Due to social distancing guidelines, medical professionals will not be able to assist the guest until a Covid test is administered, and the results received.

Guests will be required to pay for the test and any associated costs prior to it being administered, even if they are still unconscious. Any guest who is found to test positive for Covid-19 (or 19-1/2) while inside the parks will be bused to Universal Orlando.

Stayed tuned to Uncle Walt’s Insider as we continue to bring you breaking news.

Wait a minute, is this just Disney’s way to make Universal look bad? Let us know in the comments below!

Cover photo: This will keep the Castle from being infected with guests. Photo by Michael Gray [CC BY-SA 2.0] via Flickr.

May 29, 2020 by Walt in Florida
© 2020 Uncle Walt's Insider. All rights reserved. All images used with permission. Unless otherwise attributed, all images licensed under Creative Commons CC0 license. This site is protected by reCAPTCHA and the Google Privacy Policy and Terms of Service apply.