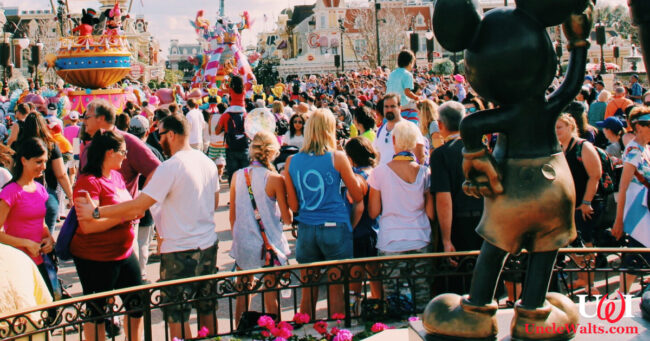 Apparently you’re less likely to catch the virus if you hold certain points of view.

WALT DISNEY WORLD, FL — As Walt Disney World inches towards its reopening date in 2025, the company is backtracking on its plans for social distancing.

The parks first announced they would require guests to undergo temperature checks, maintain distance from people they like as well as those they don’t, and immerse themselves completely in hand sanitizer. The company also said park capacity would be limited to 50%.

All of those requirements are now gone.

It’s all in the Science

Disney (the company) spokesperson Jun Disney (no relation) provided us with the reasoning.

“We’ve been following the Science as much as anyone,” Disney (no relation) explained. “All of the Science. Even the Science that contradicts the previously-announced Science. And we noticed that some activities seem to cause concern over virus-spreading more than others. Beach outings, church services, political rallies — man, the virus just spreads like crazy in those crowds. But protests? COVID-19 knows to stay away from those.

“And since we really want as many guests as possible to come visit our parks, the Science says that calling the crowds a protest will keep infection rates much lower than any health precautions will.”

Disney (no relation) looked around to see if anyone was listening.

“Don’t put this in your article, but kind of like polls and statistics, if you pick a point of view, you can find Science to justify whatever you want to do. The key is to keep repeating the word ‘Science’ — and always capitalize it. People will back anything if they think Science is behind it. Science.”

What would you like the Science to say? Let us know in the comments below!

Cover photo: It will look like this on Day One. Photo courtesy Wallpaper Flare.

June 17, 2020 by Marty in Florida
© 2020 Uncle Walt's Insider. All rights reserved. All images used with permission. Unless otherwise attributed, all images licensed under Creative Commons CC0 license. This site is protected by reCAPTCHA and the Google Privacy Policy and Terms of Service apply.