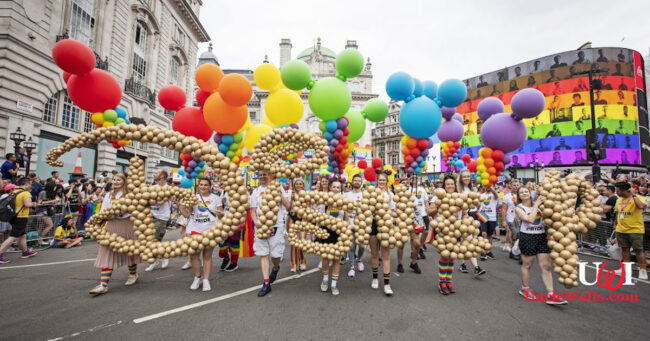 Chapek: “I wrote the script myself.”

REEDY CREEK, FL — There’s a new stage show coming soon to the Walt Disney World Resort & Spa & Alternative Lifestyle Exploration Center! In a new bid to drive the Disney Company into the ground and keep California’s lights on, the Forecourt Stage at Cornelius (formerly Cinderella) Castle (she’s a dude now) will host a cavalcade of Disney characters dressed in rainbow colors, all chanting and singing nothing but the word “gay” for 25 minutes!

“Don’t want to brag, but I wrote the script myself,” says Disney CEO Bob “Bob” Chapek, “though I probably should admit I was inspired by those chicks that hosted the Oscars. Those gals are hilarious!”

Chapek believes this is another way he can add value to the company.

“My cutbacks are having such a positive impact on our stock prices,” he says, “and parents still know and trust Disney with their kids’ entertainment. So this stage show — and other changes, like the San Francisco Bear Jamboree — is just one more way that Disney is staying at the forefront of providing quality grooming, I mean, entertainment services to kids of all ages! And I do mean all ages. Gotta catch ’em young!

“But even if this doesn’t help the company, at least maybe those couple hundred ultra-woke Cast Members with too much time on their hands will stop emailing me every five minutes.”

Will you ever trust Disney with your kids again? Let us know in the comments below!

Cover photo: This official Disney photo sure does leave out a lot of races, ethnicities, and genders. Be better, Disney, be better! Photo by The Walt Disney Company.

April 22, 2022 by Marty in Florida
© 2020 Uncle Walt's Insider. All rights reserved. All images used with permission. Unless otherwise attributed, all images licensed under Creative Commons CC0 license. This site is protected by reCAPTCHA and the Google Privacy Policy and Terms of Service apply.